Anne de Bretagne: A symbol from birth of a ‘free’ Brittany 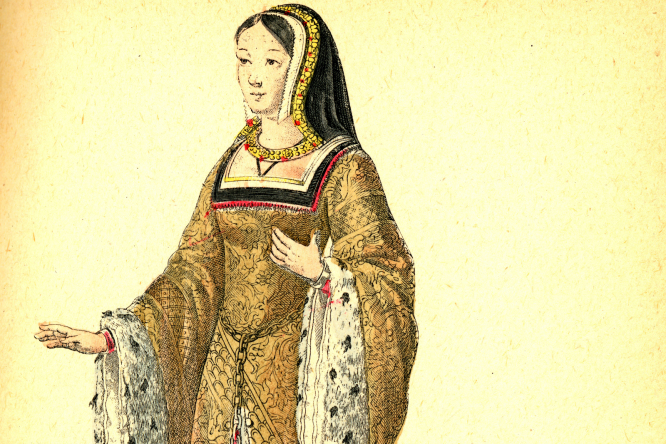 Anne de Bretagne was only 11 years old when her father (Francis II, the Duke of Brittany) died, and in 1488 she became the ruling Duchess of Brittany Pic: Morphart Creation / Shutterstock

Anne de Bretagne (1477-1514) was destined from birth to be a symbol of Brittany’s struggle for independence, even once the struggle had been lost.

She was born in the fairy-tale Château des Ducs de Bretagne in Nantes. The castle, surrounded by its moat and topped off with battlements, has been carefully preserved and now contains a modern museum, the Musée d’histoire de Nantes. An heiress, she grew up during a series of conflicts over Brittany, including the so-called ‘Mad War’ (1485-1488) and always knew that her destiny would be to defend her birthright.

“She was brought up to defend Brittany and it was her father’s dying wish that she keep the Duchy independent from France,” says Pierre Chotard, historian and curator at the museum. “There is nothing to suggest she resented the burden of being expected to produce sons or retain the independence of Brittany. She was every inch a queen.”

The task began early in her life; in 1488 she was only 11 years old when her father (Francis II, the Duke of Brittany) died, and in 1488 she became the ruling Duchess of Brittany, as well as Countess of Nantes, Montfort, Richmond, and the Viscountess of Limoges.

'With her illustrious lineage and fabulous inheritance, she was one of the most desirable catches on the marriage market'

Kings across Europe vied to match her with their sons and heirs; whoever married Anne and produced a male heir with her would see their progeny inherit Brittany.” Whilst simultaneously attempting to annexe Brittany by force, the Kings of France had been manoeuvring to achieve this through marriage for several generations.

The 11-year-old child was engaged to Edward, Prince of Wales (the son of Edward IV of England) until he disappeared, assumed assassinated by Richard III. The future Henry VII of England was also a contender for her hand, as was Maximilian I the Archduke of Austria, Alain I of Albret, Louis I the Duke of Orléons and heir to the French throne (despite already being married at the time), John IV of Chalon-Arlay, also in line for the French throne, Edward Stafford, the third Buke of Buckingham, and the Viscount John II of Rohan wanted a double marriage between his two sons and Anne and her sister Isabelle.

In the end, a year after having been crowned Duchess of Brittany in Rennes in 1489, she was married by proxy to Maximilian I of Austria at Rennes Cathedral (in 1490). She was just 13 years-old. The French regarded this as a serious provocation; not only had they not been asked for their consent, but it meant that an enemy of France would be the ruler of Brittany.

The French king, Charles VIII (often called Charles the Affable), laid siege to Rennes and two months later, Anne’s sister Isabelle having died, Rennes fell to France and Anne was forced to renounce her proxy marriage. The 21 year-old king of France (who had inherited the crown at the age of 13) then proposed a series of alternative alliances with French princesses, but ended up by getting engaged to the then 14 year-old heiress himself.

Legally, however, Anne was still married, and Charles was engaged to Maximilian’s daughter, Margaret of Austria. A hasty marriage took place in December 1491 at dawn, and the Pope was subsequently persuaded (in return for a variety of considerations) to validate the marriage the following February.

The marriage contract stated that whichever of them lived longest would become the ruler of Brittany, but that if Anne was the survivor she would marry her husband’s heir on the same terms, giving the French crown a double shot at possession of her inheritance.

In return, Anne became Queen of France, duty-bound to produce a male heir to the throne. Despite living apart from her husband for much of her marriage, Anne produced six children in quick succession, none of whom survived infancy. Many were stillborn, or died shortly after birth.

Intelligent, political and shrewd, she despaired at each death. She lived mainly in Clos Lucé near Amboise (where Leonardo da Vinci lived later on), and the châteaux of Loches and Plessis, although during the conflict with Italy, she lived in Lyon, Grenoble and Moulins.

When her husband died in an accident in 1498, although she was still only 21 she was already becoming physically exhausted by constant pregnancies – embarked upon before she had even finished growing herself. Small and pale-faced, she limped because one leg was shorter than the other. As a widow, freed from pregnancy she took up the reins of governing her Duchy, with the express intent of keeping it independent from France. She had coins minted bearing her name, and became a notable patron of the arts, gathering around her writers, humourists, poets, historians, artists and musicians.

The terms of her first marriage still applied, but fulfilling them seemed a remote possibility; the new king Louis XII was already married to her sister-inlaw Joan (the sister of Charles VIII). Obviously Anne would have to marry someone in order to provide a legitimate heir for Brittany, and there can have been no shortage of offers, but the contract still stood, and in the event Anne agreed to marry Louis XII on condition that he could obtain an annulment of his marriage within a year.

She turned her attention to ruling her beloved Brittany, forming a large court around her. The pope was persuaded to annul the marriage and in 1499 she duly married her first husband’s successor.

She was an adult this time, however, and obtained a better settlement; unlike during her first marriage, she would be recognised as the sovereign Duchess of Brittany, and although in reality her husband was the ruler, he issued orders in her name.

The marriage contract also stipulated that the couple’s second child, whether male or female, would be Anne’s heir, meaning the Duchy would remain separate from France. This second marriage took place in 1499, and Anne was subsequently crowned Queen of France for the second time in 1504, the only Duchess to have done so. It meant a resumption of her endless pregnancies. Two daughters survived, Claude of France (1499-1524); and Renée of France (1510-1574).

Anne mainly lived at the Château of Blois, from where she commissioned art and architecture including her parents’ tomb in Nantes Cathedral. Her favoured symbols represented the four virtues of courage, temperance, justice and prudence. She named Claude as heiress to the Duchy, and arranged a marriage to Charles of Austria, but her husband was against this plan. He wanted their daughter to marry Francis, the heir to the throne. Anne refused to agree, fearing this would end independence. She pushed for Renée to be named heiress of the Duchy, but her husband would not agree. She set off alone and toured Brittany, making sure the population knew she was devoted to independence. Louis XII wrote as many as six letters a day demanding her return, but he maintained his plans for Claude’s marriage.

Anne of Brittany died at the Château of Blois in 1514 of kidney stones, leaving a will in which she conferred the Duchy of Brittany to her youngest daughter Renée.

Louis XII ignored this will completely. He confirmed Claude as the heiress, and married her off to Francis, who became Francis I in 1515, making Claude Queen of France and securing the union of Brittany and France, which was confirmed in 1532 with the signing of the Edict of Union.

When Francis I died in 1547, his son Henry II inherited the crown, becoming King of France, which included the province of Brittany. The parliament of Brittany resisted until it was dissolved at the end of the 18th century.

'Today, polls estimate that around 20% of Bretons would vote for independence, and around half of them consider themselves Breton first and French second'

The preservation of the Breton language remains a sparking point for hot debate.

During her lifetime, French propaganda depicted Anne de Bretagne as the perfect queen who symbolised the peaceful union of the Kingdom of France and the Duchy of Brittany.

After her death she was largely forgotten, until the mid-1800s when Breton nationalists looking for a figurehead rediscovered her. Since then around 200 books have been written about her life and times, as the debate about independence for Brittany ebbs and flows.

Missions Locales: Unemployed youngsters in France thrown a lifeline
2 December 2021
More from Profiles
More from Connexion
Get news, views and information from France
Join the newsletter
Subscribe to The Connexion