Gustave Eiffel: Revealing the man behind the Eiffel tower 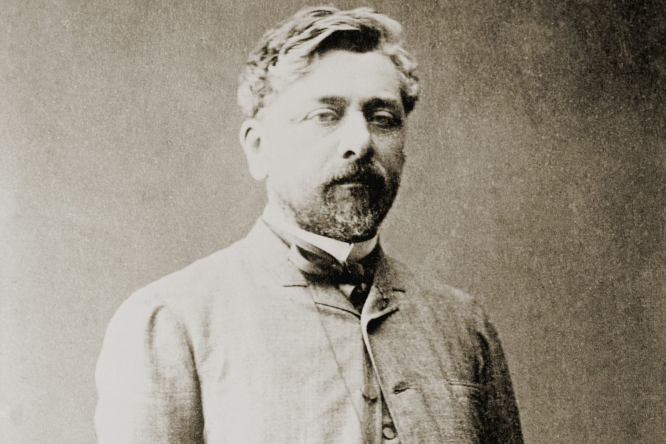 Gustave's Eiffel Tower is his most famous achievement of course, constructed between 1887-1889 for the World’s Fair in 1889 which was held in Paris, however his resume is extensive Pic: Everett Collection / Shutterstock

Gustave Eiffel (1832-1923) lived through an extraordinary period of history, during which France developed from a fragile, post-revolution monarchy into a modern democracy.

When he was born, although electricity has been discovered no-one was even dreaming of installing electric lights and sockets in their houses, motorcars did not exist, nor did telephones, photography, radio, gramophones, or even bicycles. Buildings were heated using solid fuel, meals were cooked on wood burning stoves, transport meant horses or Shanks’ Pony.

By the time he died, when the world was reeling from the effects of World War One, all the aforementioned marvels were in daily use along with street lighting, cinema, cigarettes, short skirts, x-rays and electrical appliances including refrigerators, sewing machines, and hair driers. Shoes, clothes, toys and household goods were made in factories.

The industrial revolution took place in the UK between 1760 and 1840, but happened later and at a slower pace in France, and Gustave Eiffel lived through and was instrumental in that massive upheaval.

Born in Dijon, his father was an ex-soldier and his mother a business woman. (The family name at that time was Bönickhausen dit Eiffel, which Gustave legally changed to Eiffel later in his life.) His mother was the powerhouse of the family, running her own successful coal business, so as a young child he spent most of his time with his maternal grandmother. He was close to his mother however, and remained so all his life.

In 1850, aged 18, he went to Paris where he studied chemistry and metalwork at the Ecole Centrale des Arts et Manufactures. Having got his degree in 1855, he expected to take over his uncle’s factory but a family rift scotched that plan.

'Eiffel’s approach was strictly logical. He insisted on accurate technical drawings and weight-bearing calculations at the planning stage'

In 1856, via an introduction from his mother, he met Charles Nepveu who specialised in metal constructions, and was pioneering the use of compressed air in forges. Steel, light, resistant and easy to work, was beginning to overtake iron as a construction material, and it was especially in demand for the railways that were being built all over France. There was an insatiable need to construct railway tunnels, bridges and viaducts.

Eiffel’s approach was strictly logical. He insisted on accurate technical drawings and weight-bearing calculations at the planning stage. Interested in all the latest technologies, he used all the latest innovations in his designs, and began to earn a reputation designing railway bridges. His first big job was the Passerelle Eiffel over the Garonne river in Bordeaux, which still exists today although it is no longer used by trains. It was such a success that he was quickly commissioned to design more bridges.

In 1862, at the age of 29 he married Marguerite Gaudelet, who was only 17. Together they had five children (3 girls and 2 boys born between 1863 and 1873.) Tragically however, Marguerite died in 1877 aged 32, and he never re-married. His daughter Claire took over the running of the house.

In 1866, Eiffel bought ‘Ateliers Pauwels’ near Paris and set up his own company. He employed the brightest young engineers of the era from all over Europe and it was one of these, Théophile Seyrig, who designed the metal inner framework of Auguste Bartholdi’s Statue of Liberty, inaugurated in New York in 1886.

The company designed railway stations all over France as well as in Hungary (the Budapest-Nyugati railway station) and Turkey (the Basmane de Izmir railway station). The famous Maria Pia Bridge in Porto, the Observatory in Nice, the Palais Galliera in Paris; Eiffel’s company built them all. He worked all over the world; the Central Post Office in Saigon, Vietnam, the Chiclayo Cathedral in Peru, and the Cascades El Ourit Railway bridge in Algeria, to mention just a few.

The Eiffel Tower is his most famous achievement however, constructed between 1887-1889 for the World’s Fair in 1889 which was held in Paris. The date was also the centenary of the 1789 revolution, and the aim was to showcase French engineering. Worldwide engineers were competing to build a tower higher than 1000 feet tall, but at the time they didn’t have the necessary technology. Eiffel promised to build the tallest tower in the world, and having won the contract advanced 80% of the construction costs out of his own pocket.

In return, the authorities granted him a 20-year lease to run the attraction for his own profit. The tower was constructed in sections which were pre-fabricated at Eiffel’s workshops.

No-one had ever attempted such a construction before, and at every stage there were new technical challenges. Needless to say, there were other challenges too: a group of around 50 leading writers (including Charles Garnier, Alexandre Dumas fils, Emile Zola, and Guy de Maupassant) wrote an open letter protesting against the construction, and the workers went on strike for more money.

Eiffel paid extortionate wages, and launched a press campaign to persuade the public to appreciate the tower, and despite everything it continued rising into the sky at a rate of 12 metres per month. It was finished on time for the World Fair and Eiffel was awarded the Légion d’Honneur. When it was opened to the public it was an instant success, not just because of the view but because of the ‘high speed’ hydraulic elevators.

'In just six months, the tower received two million visitors proving the doubters wrong: it did not fall over and kill thousands of Parisians, and visitors were not asphyxiated at the top'

Eiffel turned his attention to the construction of the Panama Canal, and was almost consumed by the scandal that broke out. Previous attempts to build the canal had failed and French MPs had taken bribes to keep quiet about half a billion French francs which had been lost when the company went bankrupt, meaning thousands of small private savers had lost their money. Eiffel was initially swept up in the scandal, but although on appeal he was exonerated, some mud inevitably stuck. Streets named after him were renamed, and the press had a field day.

Eiffel withdrew from the day to day running of his company and began researching meteorology and aerodynamics. In 1898, he installed a weather station at the top of his famous tower. It was not just a practical decision, it was also designed to extend the tower’s longevity because by then it had begun to lose its novelty value and some people were calling for its demolition. In 1901 he installed a wireless transmitter, and equipment to measure radioactivity and air pollution. Eventually the tower was declared essential to French defences, and its survival was ensured.

By the turn of the century aviation was the fastest developing new technology, although the physics of flight were barely understood. Eiffel conducted experiments on aerodynamic drag, and discovered that it was reduced when a moving object had a rounded face and a long tail (in the shape of a drop of water).

During World War One he worked on propellers and projectiles. In 1917 he developed a fighter plane called Laboratoire Eiffel, but the project was abandoned in 1918 when the test pilot died in a crash.

Gustave Eiffel died in 1923 in Paris at the age of 91, and was buried in the family plot in the Cemetery at Levallois- Perret. The survival of his famous tower is no longer in doubt, but some of his other iconic constructions are under threat. The Maria Pia Bridge in Porto is in urgent need of maintenance and the Passerelle Eiffel in Bordeaux, although a protected monument, currently has no clear function.

Since being constructed, the Eiffel tower has received more than 300 million visitors, and still boasts the highest publicly- accessible observation platform in the EU, and the second highest in Europe.

WHO recommends lifting of international Covid travel bans
23 January 2022
More from Profiles
More from Connexion
Get news, views and information from France
Join the newsletter
Subscribe to The Connexion