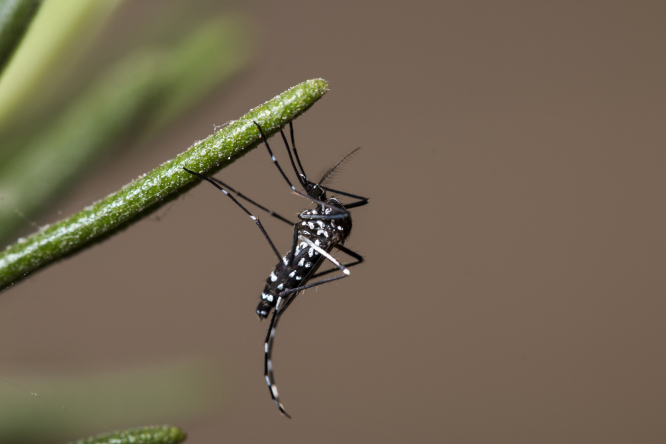 Attemps to control an invasive species of mosquito have seen traps set by authorities in three areas of southern France as part of a three-year trial.

Tiger mosquitoes, which are black with silvery-white stripes, are originally from South East Asia and have been spreading rapidly through France over the last 20 years.

Worst-hit places – where at least 40% of municipalities in the department are colonised – are mostly in the south of the country, including around Perpignan, Nîmes, Montpellier, Marseille, Nice and in Corsica, but numbers are also high around Lyon.

The mosquitoes are able to breed in small containers of water such as plant pots and gutters and have proved to be immune to most efforts to eliminate them using pesticides.

They are quick to bite humans, especially around dawn and dusk, and can leave an itchy, inflamed spot. More worryingly, tiger mosquitoes are responsible for spreading a number of tropical diseases, including dengue, chikungunya and Zika.

Yvon Perrin, from the Entente interdépartementale pour la démoustication (EID) which is carrying out the trials, told The Connexion: “Our plan is to have a programme of lots of traps in the communes, and to see, over three years, if there is a significant reduction in problems caused by tiger mosquitoes.

“We started at the beginning of July and the project will run in 2021 for three months.”

The three communes involved are all in Hérault department: Clapiers, Castelnau-le-Lez and Saint-Clément-de-Rivière.

Two sorts of traps are being used: one which uses a substance to trick mosquitoes into thinking there is a blood source inside, and a second where water at the bottom of the trap tempts them to lay eggs.

Both traps catch the mosquitoes on sticky paper and cost around €1.

EID agents will be in charge of maintaining the traps for the first year. In the second year, their remit will extend to looking for and emptying stagnant water in gardens. In the final year, local residents will largely do this themselves, as well as maintaining the traps, with continuing support from EID.

“We hope to see a noticeable reduction in the number of tiger mosquitoes, and more awareness of the danger of leaving breeding water in gardens,” said Mr Perrin.

If successful, communes are likely to be put in charge of their own tiger mosquito trapping projects in future.