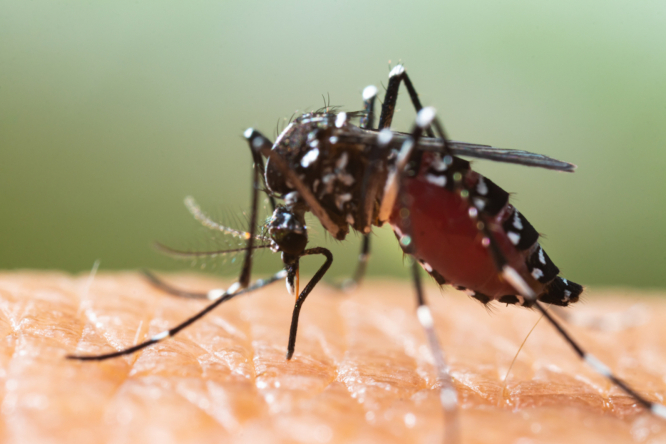 France is on heightened alert for tiger mosquitoes as temperatures rise with regional health authorities taking increased measures and extra vigilance against the insect.

Its annual period of activity is from May 1 to November 30 as temperatures rise.

The insect is especially common in the south-east of France (Alpes-Maritimes, Bouches-du-Rhône, Vaucluse, Gard, Hérault, Pyrénées-Orientales, Corsica) and Rhône, where it is present in more than 40% of communes in each department.

We asked an expert for advice generally on repelling any mosquitoes in France and what works best.

Essential oils and citronella are no good for repelling mosquitoes, according to the scientist who advises public authorities on the insect.

He said: “Essential oils and citronella do not work. They may fend off a mosquito under laboratory conditions but in the real world, protection will last for less than a tenth of a second.

Choose a repellent that contains DEET or icaridin

“Repellents which work are those which contain DEET, KBR 3023, also known as icaridin and IR 3535, and if they are marked suitable for tropical conditions - they should work for 6-8 hours.

“For pregnant women or young children, it is better to use physical barriers such as clothing or mosquito nets as they are non-toxic.”

Mosquito traps are not recommended

He says bracelets and ultra-sound machines are scams and he does not recommend traps: “They use CO2 to attract mosquitoes. You may be happy to have killed 50 but the danger is, it has also attracted 500 more who will find you before the trap.”

Mosquitoes can be attracted by CO2 emissions from 150-200 metres away and as they get closer, heat and odours help them decide which prey to go for. Mammals and birds also get bitten.

The female seeks out the proteins in blood she needs to mature her eggs, which she lays about 48 hours later, and then the cycle begins again.

She may bite four or five people or animals to feed one batch of eggs, which will then hatch out within three or four days in 25°C. A tiger mosquito can live for 30 days, others not so long.

They are more active in the day, while other mosquitoes in the evening and at night.

There are 70 varieties in France but only the tiger mosquito, now present in 51 departments, is dangerous to man.

“They can transmit dengue, zika or chikungunya, but only if they have bitten an infected human first, who, in France will have to be someone who has travelled from a country with the disease.

“There is an effective network in place in France to warn doctors to look out for anyone with possible symptoms and then the area near their house will be sprayed with insecticides.

“In 2018, 180 travellers came back with dengue, none with zika and six with chikungunya. Dengue was passed on to five people via tiger mosquitoes in France.

“Healthy people are unlikely to suffer much from the fever. However, fighting against the spread of tiger mosquitoes is taken very seriously and the best method is to prevent new mosquitoes from hatching out.

“To do this, we advise everyone to empty water out of any container in their garden every two days, so the female has nowhere to lay her eggs, not forgetting objects like the foot of your parasol.”

This only works for tiger mosquitoes, as other varieties lay in larger pools of usually dirty or stagnant water, not in gardens.

Consumer magazine UFC-Que Choisir says insecticides are the only effective method to kill mosquitoes but should be limited as they are bad for your health.

The family of pyréthrinoïdes work, it says, and on labels, they usually have “thrine” at the end – eg. transfluthrine, tétraméthrine.

It advises against plug-in diffusers.

Warm French weather brings out mosquitoes: How to avoid being bitten

7 hours ago
5
Tax: France to debit 10m households which have not paid enough