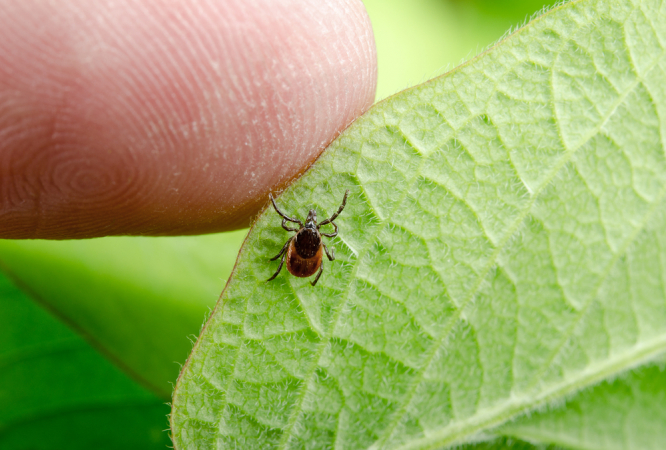 Ticks are usually found in woods, forests, mountain pastures, and meadows; but they are also increasingly being reported in private gardens Pic: Photo Fun / Shutterstock

Almost half of ticks found in Bourgogne-Franche-Comté, eastern France, are carriers of pathogens including Lyme disease, far more than the national average, France’s agriculture research centre has warned.

Almost one in two ticks in the region is now a carrier of some kind of pathogen, including Lyme disease, a new study by l’Institut National de Recherche pour l’Agriculture, l’Alimentation et l’Environnement (Inrae) found.

This compares to one in three ticks in Hauts-de-France, Nouvelle-Aquitaine and Ile-de-France. In Brittany, Normandy, and Pays de la Loire, the number is lower still, with just one in five ticks contaminated.

Read more: Where in France you are most at-risk from Lyme disease ticks

Ticks are usually found in woods, forests, mountain pastures, and meadows; but they are also increasingly being reported in private gardens.

Last year, during the first Covid-19 lockdown, 47% more ticks and tick bites were counted in private gardens (compared to the period from 2017-2019), probably because people were spending more time there than normal.

A Swiss study also found a strong connection between beech trees and ticks; the more beech trees, the more ticks are likely to be found in the area.

Overall in France, ticks are most likely to be found in long grass, and wooded areas near the coast (such as near the Mediterranean sea or in Brittany), and most commonly in dense forest.

Advice on the ‘invisible disease’

The presence of Lyme disease in France is monitored by research programme ciTIQUE, which was founded in 2017 by Inrae.

It works to gather geographical information on the spread of ticks and the pathogens that they carry, and partly operates via an app – Signalement Tique – that allows users to report a bite.

Lyme disease is often known as an “invisible disease”, and can affect anyone. It is transmitted by tick bites, which are carriers of the bacteria Borrelia burgdorferi sensu lato.

It can cause muscle spasms and paralysis, intense migraines, fever, dizziness, fatigue, and balance problems. Its symptoms often appear similar to those of other conditions, making it difficult to diagnose.

If you do suspect or know you have been bitten, you are advised to: