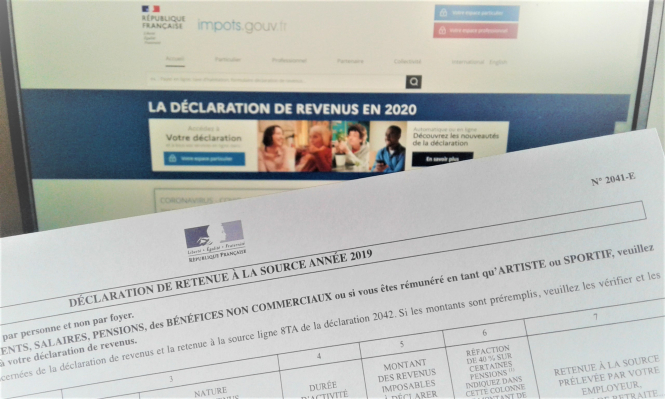 Income tax in France: what is form 2041E?
By Hugh MacDonald

Q: A form 2041E came up in my online space. It seems to be related to prélèvement à la source but I do not know what it is for. P.W.

A: Form 2041E relates to tax at source but it is not new and is not linked to the introduction of across the board tax-at-source in January 2019. This form concerns non-residents who have French sources of income from which tax has already been taken at source in France. Its purpose is to notify this fact to the non-residents’ tax service via your declaration.

Firstly, note that it only relates to non-residents – so it should not have come up if you are a French resident – and secondly, it only concerns people who have certain French incomes directly subject to tax at source, such as money from salaried work in France or from French pensions.

Those concerned should fill in the relevant incomes on this annexe section, including the amount of tax taken at source by the employer or pension body. The amounts are also carried over into the relevant main sections of the tax declaration and the total amount of tax taken at source in France goes in box 8TM on the main 2042 declaration. If the form does not apply to your situation, you do not have to fill it in.

Q: Should at-source tax from savings be placed in new section 8 boxes?

A: These are two different issues and no, you should not add the tax and social charges taken from your French bank interest into the new section 8 boxes. The new box 8HW is to show instalments of
income tax taken out of your bank account in 2019 by direct debit (estimated by the tax authorities, based on your previous declaration). These levies are adjustable later with a refund or additional demands once your full income for 2019 is known after your declaration. The amount in this box could relate, for example, to instalments of income tax on a UK pension that France is not able to directly tax at source.

However, the tax and social charges taken at source on your French bank interest relates to the “flat tax”, officially called prélèvement forfaitaire unique (PFU). This is usually 12.8% income tax and 17.2% social charges, making a total of 30%. You are presumably (as would be correct) paying social charges at a reduced rate due to being a UK state pensioner and not attached to the French social security system. When taken off at source, the 12.8% income tax is technically an instalment and not definitive and it will probably have been pre-filled in section 2, box 2CK of the main 2042 declaration.

If you leave it there – or add it, if not pre-filled – it will effectively become definitive as part of the overall PFU flat tax calculation for the year on investment income. Alternatively you can opt for taxation according to the ordinary tax bands by selecting box 2OP, which then applies to all investment incomes for the year 2019 if you take this option. If you do so and it results in less tax, then you would obtain a refund of some of the tax paid at source.

With regard to social charges paid already on investment incomes, there are other boxes in section 2 which should indicate amounts of income that have already been subject to these. They will also probably have been pre-filled from information given to the tax office by your bank.

Your French Income Tax 2020 guide refers to CSG déductible at 6.8% being available on some investment incomes. I believe that this deduction is no longer granted where the 30% flat tax (PFU) is applied to investment income. Can you confirm this? P.M.

A: You are correct. There is now only a deductible part of the levy of the CSG social charge in the case of investment income where you make an option for taxation according to the ordinary income tax bands, as opposed to the income being subject to the PFU “flat tax” (prélèvement forfaitaire unique). This refers to a deduction from taxable income for the year of the charges levy and, where
applicable, it is usually pre-filled in box 6DE.

Q: Numéro fiscal not supplied – how can we declare income?

We have only lived in France since December and are starting our first declaration. I have been sent my numéro fiscal but my husband’s has not arrived. We applied on the same day. Should he chase it up? I began my online tax declaration but could get no further than page 1 as they asked for his number. T.B.

A: Yes, we suggest chasing it up as soon as possible. At this stage, telephoning your tax office would probably be the best solution. If you cannot progress this in time, you are perfectly within your rights to declare by paper forms this year.

How can I declare a compensation payment for those wrongfully charged for Payment Protection Insurance in the UK? A.F

A: As these compensation payments are not income or a capital gain, it is not appropriate for you to be taxed on them again so it is unlikely you would be deemed to be acting in bad faith if you do not declare them.

Avis d’impôt statement due at the usual time

Your avis d’impôt income tax statement will be available in your personal space at impots.gouv.fr in late July/early August, ie. in the usual timeframe, despite the fact that declaration dates were extended due to Covid-19 confinement. If, when declaring online, you did not opt out of receiving a paper avis, these will also be sent out in the summer, the tax service says. Those who opted out will receive an email alert when the avis is in their online space.

You can still easily change a declaration

If you have already made your income declaration but realise you omitted part of your income or made an error, it is not too late. You can change online declarations by going back into your personal space and clicking on accéder à la déclaration en ligne, then corriger. You can do this as many times as you need to in advance of receiving your avis d’impôt. After this, you can still make changes by clicking corriger ma déclaration. This will be available from early August to mid-December.

If you declared by paper, you can send in a corrected version up until the usual deadline (June 12). Write on the first page “DECLARATION RECTIFICATIVE, ANNULE ET REMPLACE”. You can download a new form by putting the form code in the search box at impots.gouv.fr. After you have received your avis, you would need to make a formal réclamation, online via your personal space, or by letter to the tax office.

France Individual form is now only in English

The France Individual double taxation form, typically filled out by people who move to France and sent to their local French tax offices at the same time as their first tax declaration, is now supplied only in English, instead of having a duplicate section in French.

Also called SI 2009 Number 226, the form ensures your move is noted correctly by both countries to ensure you are taxed appropriately. Formerly, it was completed in both languages and sent to the tax office, which would return the English part, stamped, for return to HMRC.

Some French tax offices have raised queries after Britons sent the monolingual versions. If this applies, we suggest pointing out to them that no French section is now supplied by showing the online document at tinyurl.com/qpcb3je. An HMRC spokesman said they did it to simplify the form as the UK is not required to provide translated documents. He said this has been notified to the French tax authorities, who said they would let their workers know. “However, there may be some offices where this information has not been passed on,” he said. Some tax experts say they have continued to give their clients the old bilingual form.

Read more: Robert Kent explains why a rushed relocation pre-Brexit should be avoided