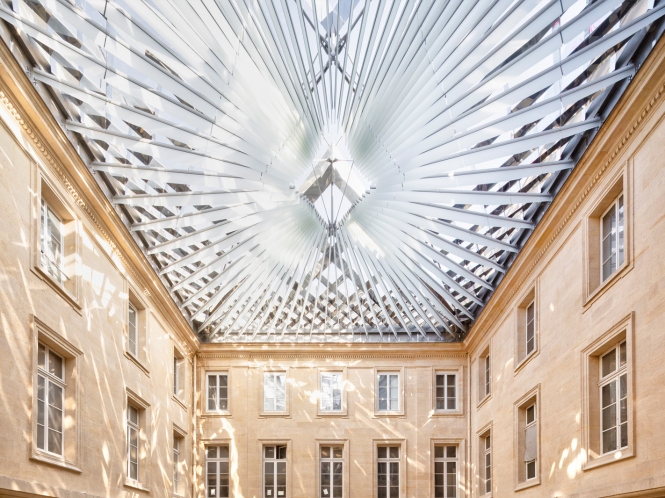 Right in the centre of Paris, the Hôtel de la Marine has opened to the public. The stunning complex was built in the 18th century by Ange-Jacques Gabriel, Louis XV’s chief architect.

As the ‘Garde-Meuble de la Couronne’, the 553-roomed complex was used to manage the royal furniture collection, and in 1777 was opened to the public on the first Tuesday of each month.

When it became the headquarters of the French navy, however, it was closed to the public. Now, after a €132 million refurbishment which lasted four years, involving 400 different people and 50 different crafts, the Hôtel de la Marine is hoping to dazzle visitors to Paris.

In a public/private partnership, some parts of the complex will become office spaces, not accessible to the public. Occupying some of that space will be FIFA – the Fédération Internationale de Football Association. It will also be the Headquarters of the Fondation pour la Mémoire de l’Esclavage (Foundation for the Remembrance of Slavery).

Financing was mainly done through loans to be paid back from ticket receipts and profits from the gift shop and catering outlets. Only €10 million came from the French government.

Access is via the Intendant’s Courtyard, which has been capped with a glittering pyramid- shaped glass roof. The 18th century apartments and 19th century reception rooms on the first floor are now open to visitors, who can explore them using a high-tech headset called ‘The Confidant’ which connects to different devices in each room. It can be used in French, English, German, Arabic, Chinese, Spanish, Italian, Japanese and Russian.

There is a new gift shop, of course, while a partnership deal with the Moma Group means there are also two restaurants on site offering fine dining as well as lighter fare.

The latest section to open is the Tapestry Storerooms of the Garde-Meuble de la Couronne, housing the Al Thani private art collection, which will be on public display for the first time. The Al-Thani family is the ruling family of Qatar and its members are all keen collectors of precious artworks. The collection is eclectic and spans from ancient to modern times, including jewellery and personal items like cups as well as paintings and drawings.

One highlight is a gold plaque from Western Iran dating back to 700-600 BC, representing “a hero and a lion in combat”. It is divided into six scenes, like a comic strip, showing a bearded figure killing a lion with a sword.

Another breathtaking exhibit is a diamond and ruby necklace set in platinum, made by Cartier in 1937 for an Indian Maharaja. Although it was originally designed for a man, it has been altered to fit a woman now.

Visits have been designed to illustrate French history, with a gallery of portraits of people connected to the Hôtel, an animation showing what daily life there would have been like before the revolution, a set of rotating mirrors reviving the 19th century balls that were held there, and a ‘Table of Sailors’ retracing journeys of ten remarkable French seafarers.

The Hôtel de la Marine is fully accessible to disabled people; and tickets for fixed time slots are available online.

The complex is open daily from 10.30am to 7pm with late night opening on Fridays until 10pm. Sanitary pass required for over-12s.