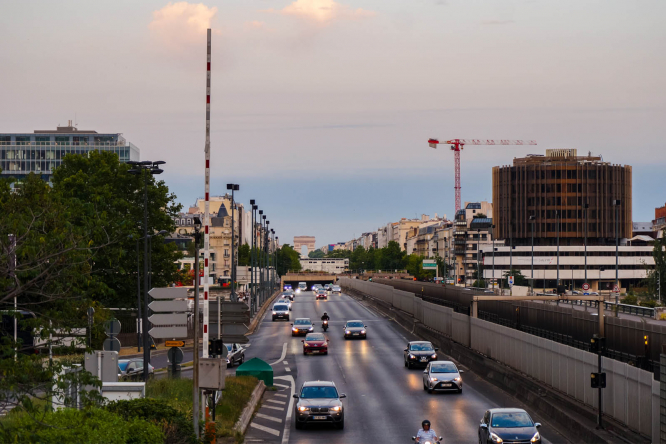 'The transformation of Paris’s ring road is a massive and long-term project, which will have an impact on the lives of many people' Pic: S. Pech / Shutterstock

A thunderous noise rises from below the vast roundabout at Place Skanderbeg between Paris and the suburb of Aubervilliers. Beggars loiter at each turning. On the greenery in the middle, people are sleeping rough.

A large white complex is going up on the Aubervilliers side. The modern glass, steel and concrete construction will house the new ateliers of the Chanel fashion label. A traffic sign indicates “PERIPH. FLUIDE ”.

To illustrate how important the road is to the city, geographer Luc Gwiazdzinski calls the people in those cars ‘temporary residents’.

Together, they could make up Paris’s XXIst arrondissement – one with five shopping malls, 13 car parks, 22 service stations, 28 hotels and about 1.6million workers.

Elevated high above the road, Place Skanderbeg is one of many inhospitable places on or along le périph’.

The 36-kilometre boulevard périphérique coincides almost perfectly with the administrative boundary of the City of Paris.

It follows what was once the enceinte de Thiers, Paris’s last rampart. Now, the city is looking at options to transform its famous ring road – and those options are the same as when it decommissioned the rampart just over a century ago.

In 1919, the city demolished its rampart after it proved useless against modern artillery. Outside lay a stretch of land 250 metres wide.

By law, the land was non aedificandi: no one could build on it.

It soon became inhabited. The area became known as la zone and its inhabitants were called zoniers or, more disdainfully, zonards, as most were camping or in makeshift shacks.

In 1925, the City of Paris annexed the area non aedificandi.

Over the more than three decades that followed, numerous, often conflicting, plans were proposed for it.

Some large, stand-alone complexes went up, such as the Cité internationale universitaire.

Between the wars, the largest council housing project in French history was built on the rampart’s base.

Because the rue Militaire inside the former rampart had become clogged up, the city decided in 1954 to build a motorway: the boulevard périphérique.

By 1973, Paris was encircled by a dual-carriageway ring road.

Both sides of the ring road are distinct: the Paris side has residential buildings but the other side often has uninviting, monofunctional constructions such as office buildings or relics of bygone industry.

To the left of Chanel’s future atelier is a massive wall of reflective façades, while the right hides a former railway station. On the façade of the station, hangs a bill: Permis de démolition. Because of its importance, getting rid of the ring road is near-impossible – it can only be transformed.

In 2008, a project covering 20 hectares proposed immeubles pont: buildings which would span the road.

The Greater Paris project, launched by the Sarkozy government in 2008, aimed to create a metropolis by unifying the two sides of Paris.

For almost two centuries, first through the rampart and then through the ring road, the area non aedificandi had confined the city.

The ring road allows access to the Haussmann centre only through Paris’s main gates. It is a physical barrier between Paris and its 29 neighbouring communes.

Today, the administrations of greater Paris face the same challenge as they did when deciding to demolish the rampart: will the area host a parkway and how much of the land should be used for greenery, and how much for construction?

In keeping with Paris Mayor Anne Hidalgo’s well-known pursuit of progressive car-mitigation polities, she is proposing to slash speed limits on the périphérique to 50kph – this is low for a fully segregated highway – and setting a lane aside for public transit, zero-emission vehicles and car-poolers. But Valérie Pécresse, who was seeking a second term as Ile-de- France president in June’s regional elections, wants to take over management of the Paris circular road. She has proposed a referendum in autumn to ask residents in the region for their opinion on the future of the road.

In 1991, the Paris Centre for Architecture and Urbanism ran an exhibit on the ring road. A book accompanied the exhibit: Des fortifs au périf. To mark the centenary of the demolition of the Thiers rampart, the authors updated their book, which now contains more than 400 plans.

Co-author Jean-Louis Cohen calls the transformation project “a cemetery of plans”: because of budget constraints and politics, those plans have not materialised.

Recently, the City of Paris launched a series of workshops to which it invited the neighbouring communes.

According to Emmanuel Grégoire, Hidalgo’s right-hand man, the area must offer housing. Otherwise, history will repeat and shantytowns will arise – just as la zone did.

However, to describe transforming a motorway which has 156 slip roads, 50 interchanges and 253 crossings as ‘technically challenging’ would be an understatement.

'There has been one success: the conversion of Porte des Lilas'

At that point, the ring road blends into the city. At the same time, Paris transitions almost seamlessly into the adjacent commune – Paris and Les Lilas collaborated closely in the project. This type of conversion, however, proved extremely expensive.

At Place Skanderbeg, the adjacent communes voted down the 2008 project, mainly because Paris had not involved them sufficiently.

Now, the city is organising a public inquiry for a new sports venue which will host the 2024 Olympic Games.

Ambitious projects are appearing in the area, which measures about one-sixth the size of Paris.

The demolition of the Thiers rampart resulted in France’s largest council housing project – now the transformation of the ring road will create the largest real estate project in France, if not Europe.

The less attractive the ring road is today, the more attractive the low-traffic parkway will be, especially once electric vehicles alleviate both the noise and the pollution.

Yet the transformation of Paris’s ring road triggers the same questions as the decommissioning of the capital’s rampart all those decades ago.

It is a massive and long-term project, which will have an impact on the lives of many people.

Previous plans were limited to one discipline, such as architecture or urbanism, but the new ones combine several disciplines.

The whole project’s success will depend on whether it can unify rather than separate the city.

Paris speed limit set to 30kph across most of capital