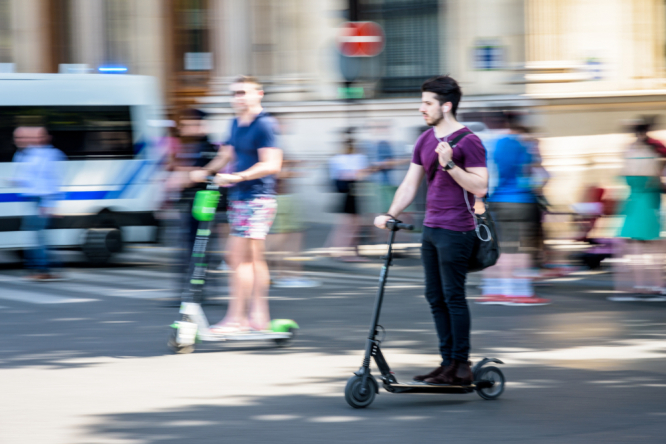 Legally, electric scooters are permitted to travel at a maximum of 25kph in France Pic: Olrat / Shutterstock

Electric scooters have been banned from the Champs-Elysées in Paris at night time until July 31, in a bid to reduce “dangerous” use.

The Paris police made the decree on Friday, July 9.

In a statement, it said: “This measure is due to an increase in individual inappropriate behaviour by road users in a public space, and in particular groups of individuals using electric scooters in a dangerous way.”

Extra police officers will be on duty in the area to “increase road checks”, and to enforce laws around the sale of nitrous oxide, or "laughing gas", the prefecture added.

Similarly, on Tuesday July 6, the Paris Mairie threatened to not renew the contracts of the three electric scooter operators in Paris if they do not make considerable progress on limiting scooter speed, and rules for safer parking.

The new rules come after a 32-year-old Italian woman was killed in June, after being run over by an electric scooter on a pedestrian alley along the Seine.

It also comes just days after Paris announced that the vehicle speed across most of the city would be set at 30kph, in a bid to improve road safety for drivers and pedestrians, “reduce sound nuisance”, and “adapt” the town to climate change.

Legally, electric scooters are permitted to travel at a maximum of 25kph in France and only on roads with a maximum speed limit of 50kph.

They are permitted in pedestrian areas, but only at very low speeds, and only if they do not disrupt pedestrians. They are not allowed on pavements, except if the local mayor has expressly permitted it.

Man fined for travelling at 98kph on e-scooter in south of France
Crit'Air rules: Paris to limit access to certain cars from June 1
Mairie plans to drastically reduce cars in centre of Paris by 2022