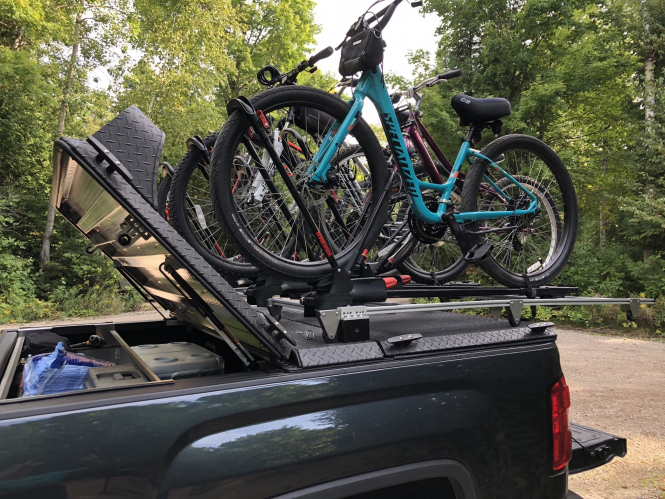 Roof racks can carry up to four bikes and have a number of advantages: keeping access to the boot, not upsetting rear visibility, and limiting likelihood of theft Pic: DiamondBack Covers / Flickr

There are 35million bicycles in France, according to official estimates – and they are often taken on holidays or day trips.

Rules for transporting cycles outside cars are strict. They have to be fixed with equipment which meets NF (normes Françaises) or ISO standards (the exact numbers are NF 18-903-2/ISO15263-4).

Other rules applying to bicycles carried on the roof are that they must be carried on a roof rack or special roof carrier, and not protrude further than the edge of the front bonnet – which eliminates roof carriers for a number of small cars.

Roof racks can carry up to four bikes and have a number of advantages: keeping access to the boot, not upsetting rear visibility, and limiting likelihood of theft.

Disadvantages are increased fuel consumption due to wind resistance, having to compensate for gusts of wind, lifting and installing, and the fact that some car parks and toll booths will be inaccessible.

For bicycles carried on the back of a car, the important legality to observe is that the back lights and the number plate are still visible.

This often means that a trailer board should be used. In France, writing or painting a number on a trailer board is illegal, so the board will have to be fixed with a proper number plate corresponding to the vehicle by a garage.

There are two sorts of rear bicycle carriers: those which fix to the boot lid (three bicycle limit), or ones which fix to a tow hitch (four bicycles limit).