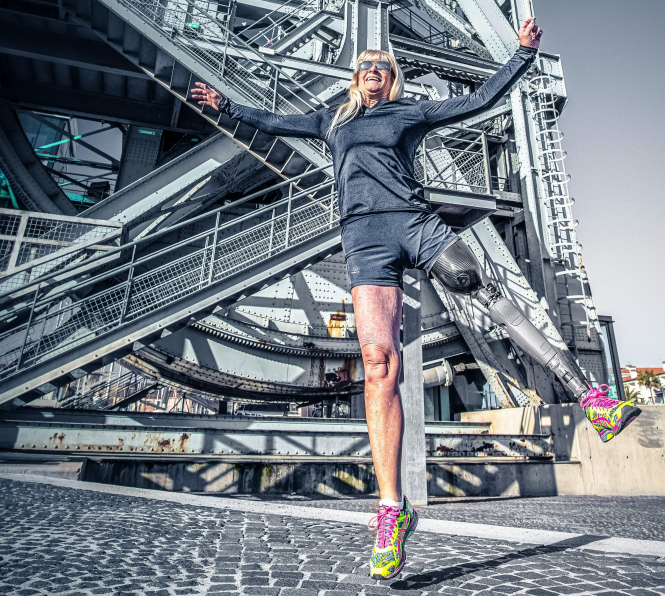 A 56-year-old amputee is set to climb a total of 2,310 steps of an old tower on May 19 to raise money for a children’s cancer research charity.

Valérie Hirschfield lost her left leg aged 40 after a series of complications that led to septicaemia.

“I had no choice. It was either my leg or my life. Since then I have never stopped doing things,” she told The Connexion.

Her latest challenge will involve her climbing up the tower of a metal lift bridge in her home town of Seyne-sur-Mer, near Toulon in Var, 10 times. The tower has 231 steps so climbing it 10 times will give her a total of 2310 steps.

She hopes to raise €2,310 for the Fondation Gustave Roussy. If she completes the challenge she will best her own record of climbing 2,000 steps.

In the past she has taken part in several tower runs for charity, climbing the Eiffel Tower, the Montparnasse Tower and the Tour First in Paris, as well as the Tour Méditerranée in Marseille.

She has also participated in five No Finish Line events, in which participants walk or run as far as they can over the course of five days, using the No Finish Line phone application to track their steps.

The Covid-19 pandemic has meant that there have not been many organised events in the past year, so Mrs Hirschfield decided to create her own.

The local mairie has given her permission to climb the tower in her home town, which she will do alone.

“Children are our future, and some children with cancer don’t have a future and that is why I want to do something to help them, in a period where charities are finding it harder than usual to raise funds,” she said.

She was born in Toulon, but her family left for South Africa in 1965 and only returned when she was an adult.

She loved sport growing up and now that her three sons have left home, she fits in one sporting activity every day, including wind surfing, paddle, flyboarding, wheelchair and standing tennis.

“That keeps me fit, and I do not have to do any specific training other than walking as much as possible with my crutches and without my prosthetic leg for the weeks just before the challenge to increase my arm strength.

“Usually I do the whole tower climb on crutches, but this time I will use my prosthetic leg for around 900 steps to support the Swedish company, BTC Orthopédie, who made it and are sponsoring me.”

She said it will be a real challenge as metal steps are very difficult.

“They can be very slippery and unstable, particularly when it is windy. I have some experience of what it is like from climbing the Eiffel Tower up 665 steps to the third floor in an organised tower run.

“The conditions were appalling as it was very cold and windy, but it was absolutely amazing. Completing it was a double victory, because as well as finishing the event I did something not usually open to disabled people as handicapped tourists are not allowed up to the third floor.”

You can donate to her fundraising project here.