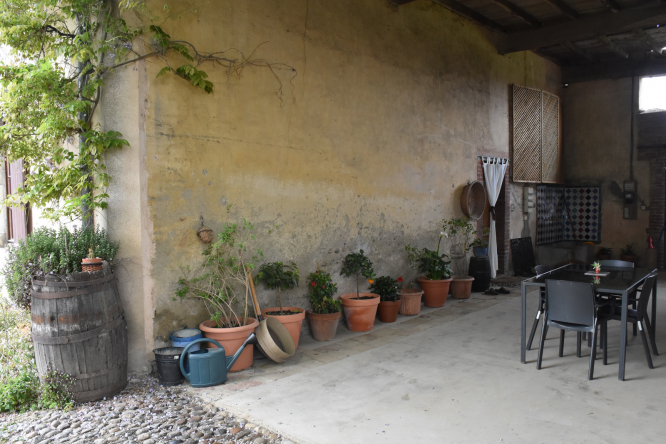 Reusing materials he had stored as much as possible was a way Nick Inman kept costs down on his patio Pic: Courtesy of Nick Inman

Under our hayloft is an area closed off at one end by massive farm doors leading on to the street, with a deep stone sink in the corner.

Once upon a time, this was plied by horse-drawn carts laden with hay. When we bought the house, its floor was a thick, uneven layer of caked mud, which we simply covered with a lorryload of stones.

For years, we used this farm porch to park our cars, but always felt we were not making the most of it. With some effort, it could be transformed into a shady patio, but how could we do it on the cheap?

The answer was in stages, improvising all the time and reusing materials we had stored as much as possible.

I started by building a couple of paths across the bare earth using large floor tiles that the previous owners had neatly stacked at the base of our old pigeonnier. At least we had relatively flat routes to the outer door and the wheelie bin.

The next phase was Concrete Day (which I wrote about a few months ago). It is sod’s law when concreting that you either order too much or too little of the stuff. I decided to err on the side of oversupply.

We dug two trenches in the porch and lined them with plastic so that the excess concrete from making the barn floor could be poured in.

Half the porch was now flat enough to walk on or to set up a table for lunch. To hide the edge of the cement, I laid a path using fragments of bricks arranged in a pleasingly haphazard style.

It was time to deal with the stone sink. We had carelessly allowed a plumber to overshadow it with ugly grey waste pipes, which dominated that end of the porch. We concealed these by burying some in the wall and hanging panels of garden trellis over the rest.

At some point during all this, my wife had the brilliant idea of turning the sink into a feature in the style of the Alhambra of her native Spain.

After some searching, we found a factory in Granada making authentic Moorish tiles and drove back with a few boxes of them.

My daughter and I spent the Christmas holidays sticking diamonds to the irregular lime-mortared wall and the effect was outstandingly good. I finished the job with a couple of old-fashioned brass taps.

Now for the remaining half of the patio floor. Where we live there is no shortage of stones of all sizes that have been used for centuries to build traditional village houses. They come from the Pyrenees, gouged out by glaciers and washed slowly down the rivers on to the plain. In the past I’ve used the smaller stones to make cobbled paving, but the bigger stones are heavier to handle. I decided to use these for the patio surface.

They create a slightly lumpy surface but look quite good when packed close to each other, the cracks filled with rubble and finished off with chunky cement.

The patio has gradually grown from benign neglect to a favourite place to sit and eat.

It is practical in other ways, with firewood logs stacked down one side and a discreet recycling alcove in the corner.

It may not be to everyone’s taste but it works for us.

When we invite our friends for tea or tapas, they sit down under the beams of the hayloft and relax. Eclectic DIY, we have found, is very conducive to good conversation.

Aerovillages project in France: Housing estate with planes in garage
20 January 2022
More from Editor's Picks
More from Connexion
Get news, views and information from France
Join the newsletter
Subscribe to The Connexion