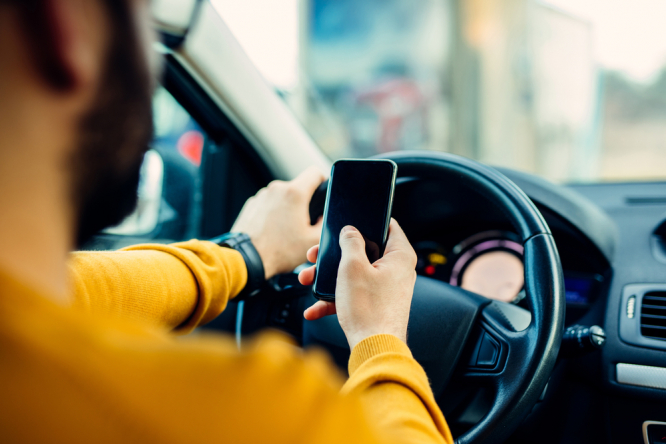 More than 1 in 10 drivers on French motorways were seen with phones in their hands in a new study by the Association of French Motorway Companies (ASFA).

The ASFA has just published the results of its first study into mobile phone use by drivers on the motorway.

A van was used to observe driver behaviour in traffic with multiple round trips on each route at different times of day used to create the sample.

The actual proportion of drivers using their phones at the wheel is likely to be higher still, as the study only counted those instances where a mobile phone was clearly seen being held.

Drivers of heavy goods vehicles were more likely to be breaking the law than drivers of smaller vehicles with 1 in 7 or 14% being caught with phone in hand, compared to 1 in 12 or 8% of other drivers.

"They’re on the road all day and driving slightly more slowly, so probably think they can get away with it," Christophe Boutin, Executive Director of ASFA told FranceInfo.

Not only can HGVs cause more damage than other vehicles, but holding a phone while driving is illegal, as driver distraction has the potential to cause an accident.

‘Lack of concentration’ was cited in 14% of fatal accidents on French motorways in 2020.

Commenting on the main causes of fatal high speed car accidents, Mr Boutin said: "Driver fatigue, the number one factor, is being caught up by lack of concentration, meaning phone use”.

Heavy traffic predicted over the weekend

For those off on holiday this weekend, the Bison Futé traffic forecast shows Friday as amber overall and red for the Ile-de-France area specifically. However, the heaviest traffic is expected on Saturday, which has been rated red. Sunday is rated as green.

Over the weekend, traffic will be heaviest if heading south and on the coast. Detailed recommendations for both Friday and Saturday can be found on the Bison Futé website.

The Tour de France will also be creating additional traffic this weekend for those locations where the various stages start and finish. Among them: Nîmes, Carcassonne, Quillan, Céret and Andorre-la-Vieille.