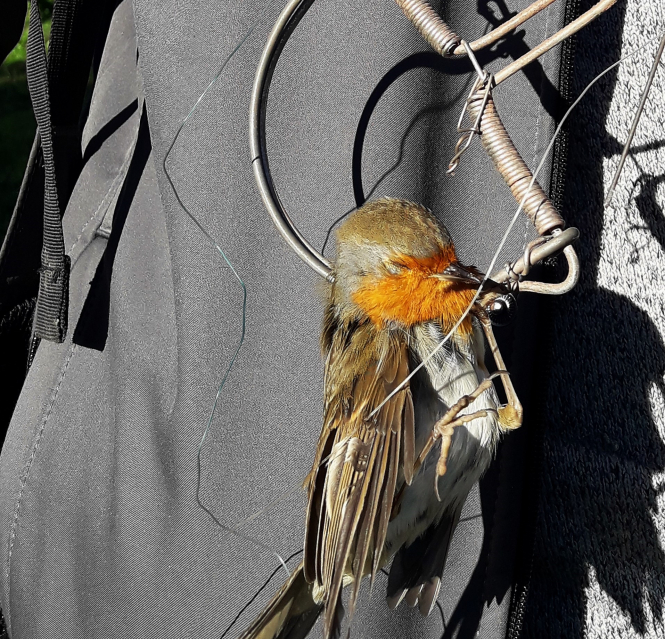 The poacher's jail sentence included three months suspended from an earlier conviction, and covered the crimes of holding, destroying and capturing protected species, as well as some lesser offences Pic:

A poacher has been sentenced for trapping and killing robins, then skewering them to sell as barbecue delicacies.

The 76-year-old’s age means he is unlikely to spend any time behind bars, but he was handed a year in jail and fined €450 by a Toulon court for using illegal traps to capture small birds, including robins, a protected species.

Inspectors from the Office Français de Biodiversité (OFB) found 75 robins in a freezer, along with many others, including pigeons, starlings and woodcock, plus a hare and boar.

It was not the first time the poacher, who was not named, has been arrested. This time, inspectors caught him red-handed with illegal wire traps, baited with flying ants, at La Crau, Var.

He was already banned from holding a hunting licence or owning hunting guns because of previous convictions.

A search of his home revealed no fewer than 1,903 bird traps and 17 hunting guns, plus materials for making traps and bait.

A cage held a number of songbirds, which he said he had caught using glue traps. These birds were freed into the wild.

A spokesman for the OFB told Connexion: “Some of the robins and other small birds had already been skewered and were ready to be barbecued. Apparently, he sells them for between €30 and €50 a skewer, with buyers being delighted by the illegal side of the meal.”

Deputy head for the OFB in the region Michel Niveau said eating robins on skewers was a long tradition in the area, especially when workers were harvesting olives in the winter. “At the time, there were lots of them and they would gather where there was activity, so the people used to put down traps and grill them at lunch. Otherwise, it only happened during times of hardship.”

He said the market for skewered birds, like those prepared by the poacher, was “very small and totally illegal”.

“Anyone found with such birds will be prosecuted. Luckily, people’s mentality is changing.” All the guns, traps, dead birds and meat found at the poacher’s were confiscated.

The jail sentence included three months suspended from an earlier conviction, and covered the crimes of holding, destroying and capturing protected species, as well as the lesser offences of hunting using prohibited traps, without a licence and without insurance.

Costs of €16,000 were ordered to be paid to a number of civil groups who joined the prosecution in the trial, as well as €2,100 for legal costs.