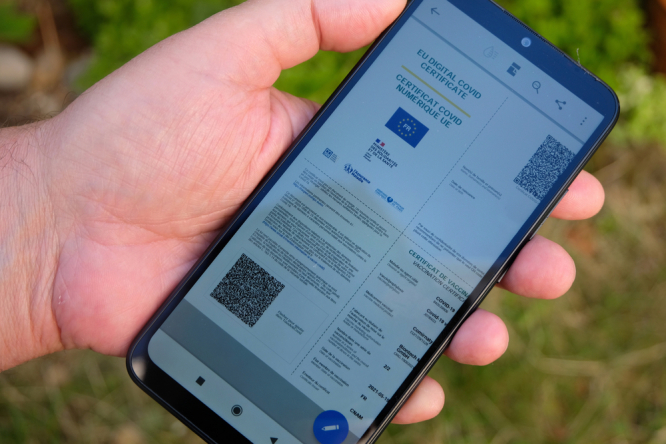 A leading French GP has told The Connexion his reasons for ‘falsifying’ Covid health pass paperwork for patients who had the right to it but could not obtain the right documents needed for travel or leisure purposes.

Dr Jean-Paul Hamon admits, on August 6-7, to helping two patients who had returned from Singapore having had their Pfizer jabs in the country, and another who had previously had Covid and recovered.

In the first cases he inputted their jab data into French systems as if he was the doctor who had administered the jabs, in the second he obtained a document enabling the patient to show he had recovered from Covid more than 11 days and less than six months ago.

He said: “When we’ve vaccinated people there are no problems to obtain the right QR codes [for recognition of documents under the ‘health pass’ scheme].

“It’s more complicated for people who tested positive before March 31 because their PCR test data has been wiped off the [Sidep] site [which is meant to enable obtaining a valid certificate proving health pass entitlement via the positive test route].

“As for people vaccinated outside the EEA with one of the vaccines recognised by the EEA, it was still complicated on August 7 even though the Foreign Affairs Ministry had told us that a system would be operational by August 2.

“So, doctors who had patients who had the right to a pass because they were vaccinated or had had Covid found themselves in a few cases unable to deliver the right pass documents. A lot did the same as me – they aren’t ‘false’ passes, they are real ones – but I’m the only one who has spoken out about it publicly. It shouldn’t be our job to be QR code issuers; this was just the final straw for me.

“After being deprived of face masks and protective equipment, after being marginalised and disrespected by the government, I feel I am expressing the irritation of private practice doctors who have given a lot during this pandemic and were completely forgotten in the Ségur de la Santé [a health system consultation in 2020, to help define budget priorities] which only focused on hospitals.”

Improvements to the system of obtaining older data from Sidep were promised recently and new ways of applying for recognition of foreign vaccination certificates were announced, however Dr Hamon said he has been on holiday and has no feedback as to whether things are working better.

In theory it was already possible to ask test labs to resend older test data to Sidep if necessary; Dr Hamon said he had been able to “get hold of it in a few cases”.

He added that the vaccinated people were a couple he had known for some years but who had recently been living in Singapore with family.

“They had valid Pfizer vaccinations with their batch numbers and dates of the jabs but couldn’t get what they needed. They tried via the embassy but it hadn’t worked – and they were young people, used to using IT.

“So they came to see me and I put the batch numbers and ended up putting in that it was me who had given them, on the appropriate dates.

“It’s not satisfactory though, as you can expose yourself to prosecutions for falsifying, but it’s ridiculous because we had tried our best, and they’re not ‘false’ vaccination certificates because the people were fully vaccinated.”

He added: “There comes a point where you just get annoyed with it. People need their health pass because people can’t travel or can’t go to places they want to go, and the pressure comes back to the doctors.”

He said he has come across other problems such as colleagues who have a different French health caisse from the ordinary Assurance Maladie and who had not been able to recuperate correct QR code certificates for their vaccinations because they could not use the ameli.fr website.

“I do hope they’ve made progress now, as there’s certainly going to be a lot of pressure on doctors to recuperate the codes now people can’t take the train or go to the cinema or shopping centres.

“We could have just limited ourselves to saying that masks need to be worn.”

Dr Hamon said an individual has now made a complaint against him to the doctor’s professional body in his area, Hauts-de-Seine.

“They say I delivered false passes. OK they weren’t the ‘right’ passes, but I’ve never issued a pass to someone who wasn’t eligible for one. I have told the Conseil de l’Ordre that if they bring disciplinary proceedings against me I will take action against them for harassment.

“It’s really annoying, because if I am called in for a hearing I’ll need to get a lawyer or lose half a day to go up to their offices, while I have better things to do.

“I have three times as many patients as the national average and 2,441 patients who have chosen me as their médecin traitant [designated personal GP] because 10 doctors have left in our commune and not been replaced.”

12 questions on how to use the French health pass