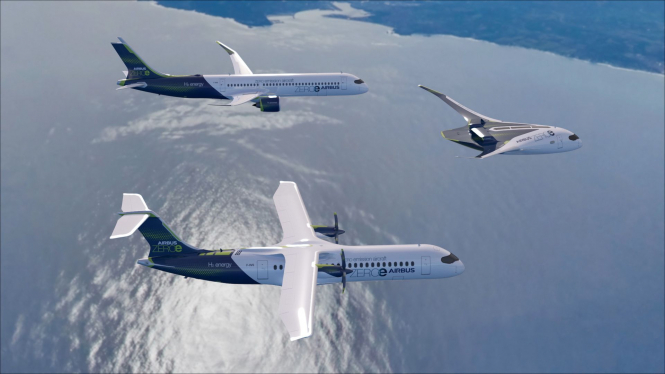 'We want green solutions, there is no possibility of nuclear power use' say Airbus
By Connexion journalist

Plans by Airbus to fly zero-emission hydrogen aircraft by 2035 have been criticised by climate researchers.

They say businesses must cut CO emissions now and not look at how to do so in the future.

A commercial zero-emissions aircraft in use within 15 years

The ZEROe plans, revealed by Airbus chief executive Guillaume Faury, would see a commercial zero-emissions aircraft in use within 15 years. The firm has three designs ready.

A turbofan jet, a turboprop and a novel “blended-wing body” plane would be powered by liquid hydrogen-fuelled gasturbine engines, with hydrogen fuel cells for onboard electric power. The only emissions would be water vapour.

However, the plan was called “unrealistic post-Covid” by researchers in the Atécopol environmental pressure group of scientists from universities and leading research agencies.

It said the firm was covering up inaction on the need to cut global emissions by 1.5% per year as in the Paris Agreement. Atécopol’s Professor Julian Carrey, of Insa, Toulouse, said: “We are not against hydrogen power but it makes little sense to put off change when action is needed now.”

Mr Faury said in an interview that the aircraft would be “zero carbon” but Atécopol said this showed “disturbing ignorance of present-day hydrogen production” that relies on fossil fuel methane, a greenhouse gas.

Even using green technology, it would need 16 extra nuclear plants, or the equivalent of covering a department in solar panels, just to supply hydrogen for flights at Paris Charles de Gaulle.

Airbus said: “We want green solutions, there is no possibility of nuclear power use. To meet the Paris Agreement, we need to change aviation’s power needs. We see this as the best way to do it and will work with others in the industry to do so.”

Pre-Covid, it was believed air traffic would double by 2050.