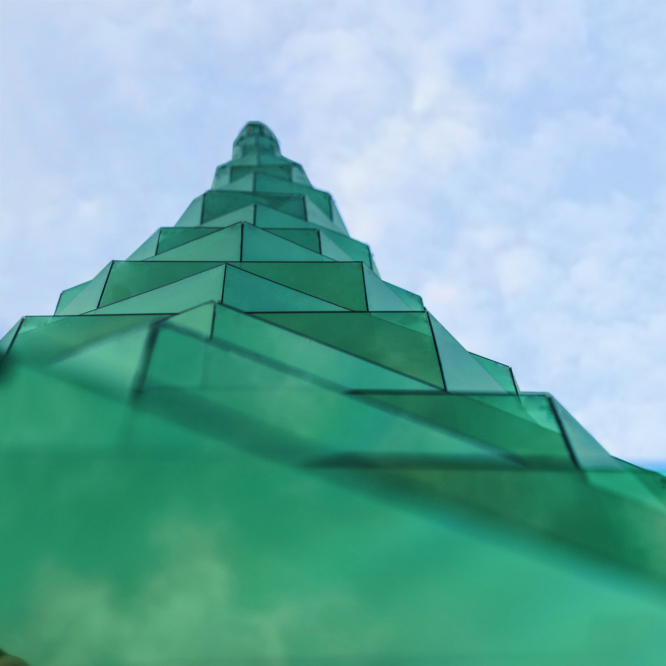 The 11 metre tall, 4 tonne structure of recycled glass and steel will be installed in Place Pey-Berland, Bordeaux next week Pic: Arnaud Lapierre

An 11-metre high structure made of recycled glass and steel is to be unveiled in Bordeaux next week as the city’s Christmas tree.

It comes after a decision last year to not have a traditional “dead tree” in Place Pey-Berland caused controversy with 17,000 people signing - to no avail - a petition to get the decision reversed.

Mayor Pierre Hurmic, a member of France’s green party Europe Écologie - Les Verts (Left), announced this year’s news saying: "There will be a Christmas tree in Bordeaux this year. I think that the people of Bordeaux will be very happy and that the page of a useless controversy is definitively turned".

This year’s ‘tree’ will light up Place Pey-Berland, in the heart of the city, from December 11 to January 2.

The structure, which measures 11 metres tall and five metres wide, is made of two tonnes of recycled glass and two tonnes of steel, and adorned with 198 mirrors in 22 different formats. It was made locally by the Métallerie Bordelaise.

It can be dismantled and put back together - a bit like a kit pack - and the Bordeaux council plans to use it for at least the next five years.

This should save the city a considerable amount of money, said Mr Hurmic, adding that despite initial costs, it “will cost annually less” than the €60,000 spent on the “dead tree” beforehand.

The structure will be lit up from the inside, allowing it to change appearance each year.

“This work will remain but each year the scenography of the lights will evolve inside, making its appearance vary, conferring a part of mystery and an expectation for the spectators. This work will perpetuate the fairytale character of Christmas,” said designer Arnaud Lapierre.

A smaller version of the ‘tree’, measuring 6 metres tall, was installed in Bordeaux’ twin city St Petersburg in Russia last year, to a positive reception from residents.

Mr Lapierre said: “People enjoyed walking around this work, seeing its reflections change according to the mood of the weather, taking pictures of themselves in the unstructured reflections of the Museum of Contemporary Art of St Petersburg”.

As for the Bordelais, the city hall’s press contact said that reaction to the news has been varied:

“There are some who are enthusiastic and others find it not so good but keep in mind that they haven’t seen it yet. We will see it at the end of next week. Generally, it’s been half and half.”

Last year, many residents were unhappy with the mayor’s decision to not have a Christmas tree in the Place Pey-Berland and a petition titled Bordeaux veut garder son sapin de Noël ! (‘Bordeaux wants to keep its Christmas tree!’) garnered almost 17,000 signatures.

Mr Hurmic revealed on Monday that he received “very specific death threats” during this time, a period he said was “hard to live through”.

Countdown conundrum: To buy or not buy an advent calendar?