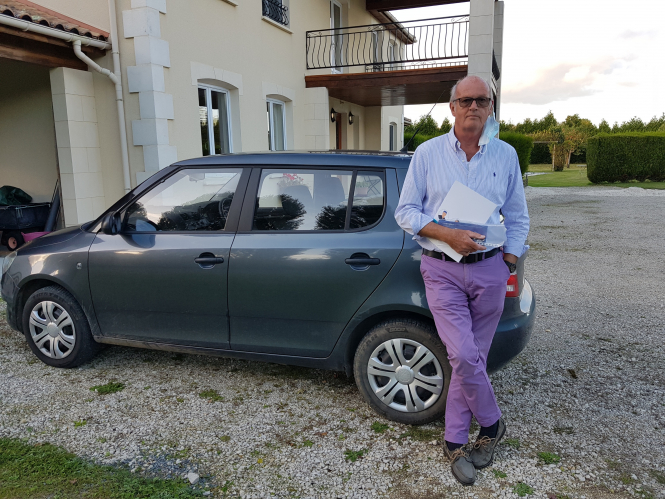 Lester Dedman was unable to drive after his licence expired Pic: Provided by interviewee

A Connexion reader says delays in processing his UK to French driving licence swap left him unable to drive all year.

Lester Dedman, 70, who lives in a hamlet of 20 houses in Deux-Sèvres, said he applied on the ants.gouv.fr website last year, six months before his birthday on December 13.

However, he said language confusion over the spelling of his email address led to technical issues and to being asked to apply again.

He did so the day before his birthday, when his UK licence was set to expire. Since then, he had been “at my wits’ end”, due to being unable to drive legally.

Latterly, as with many Britons who applied in 2020 and are, in theory, meant to be treated like EU applicants under Brexit transition period rules, he was asked to provide a certificate of his right to drive. This took him some time to obtain.

An Interior Ministry spokesman told Connexion this allows them to check the person’s situation for any possible driving offences affecting the licence.

The ministry did not, however, respond as to why this is not requested of EU citizens and if it is due to information exchange issues after Brexit.

Mr Dedman, who used to work on opening new shops, said he had not had responses to recent online queries via the Ants site and he had struggled on previous attempts to get through by phone.

He lives in a hamlet and the nearest shops are 5km away. “I have three kids in the UK, who I’ve not been able to visit since March last year.

We can’t get to the airport, which is an hour away and taxis are €300. My wife has a licence but she’s nervous and won’t drive in France. There’s no bus, apart from the school bus.

“I’ve had to ask friends to help. When they go to the supermarket they pick us up and take us too, but it’s getting ridiculous.

“I bike 5km to pick up my medicines. It’s simple things like going to the doctor or dentist, and when you’re older you tend to do it more often than before.

“I wish Ants would communicate more, even if just to say they are inundated.” He added he had given up on his HGV categories, as Ants said it would be slower and require a special medical.

Update: Since we spoke to Mr Dedman and raised his case with Ants, he was contacted by the service and has been asked to send in his UK licence in return for an attestation giving him the right to drive in France until February 13.

He was able to drive his wife to the airport for a family wedding. He said he is “eternally grateful for closing this saga for us”.

Q&A: What does the UK-France driving licence deal mean for you?
France set to send out millions more driving fines after Covid lull
How can I check how many points I have on my French driving licence?