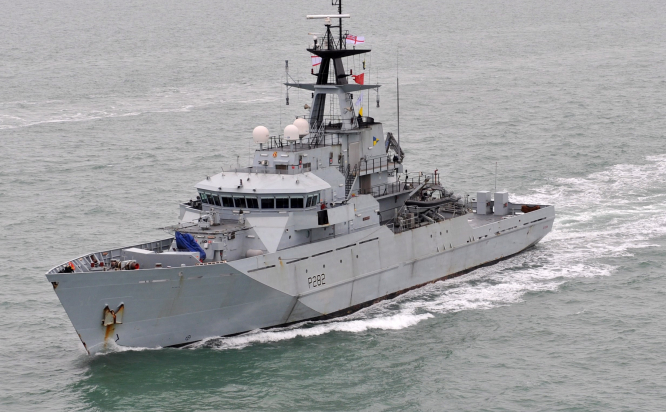 One of the naval vessels despatched by the UK to Jersey - HMS Severn Pic: MOD

Up to 80 French fishing boats have gathered off the Jersey coast protesting against new restrictions to their access to UK waters around the crown dependency – two British naval gunboats have arrived and two French patrol boats have been dispatched.

Tensions are rising between the UK, France and Jersey authorities, with the UK supporting Jersey’s new allocation of fishing rights, Jersey insisting it has followed the Brexit deal rules – and France insisting the opposite.

Media coverage on either side of the Channel is contrasting with The Telegraph referring to ‘French belligerence’ and stating French fishermen are feared to be set to blockade the harbour of Jersey capital St Helier amid threats to ‘bring Jersey to its knees’.

The French press by contrast has stressed the fishermen’s protest is ‘peaceful’ and ‘calm’.

Today France’s Europe Minister Clément Beaune told news agency AFP that “we must not let ourselves be impressed” by Britain’s “manoeuvres” off the coast.

The situation has escalated since Tuesday, when French Sea Minister Annick Girardin warned of possible retaliatory measures concerning Jersey’s electricity supply, most of which comes via a cable from France.

The UK’s Ministry of Defence has confirmed two of its ships are conducting ‘security patrols’ as a ‘precautionary measure’, however some commentators have said sending the naval ships, equipped with machine guns, was heavy-handed.

France has now confirmed sending its own vessels to carry out patrols.

France says the Jersey authorities have not followed the rules in the new Brexit deal, in their allocation of fishing licences to French vessels.

Reports state that the fishing vessels allowed a freight ship out of the harbour this morning after an initial delay.

The president of the Normandy fishing committee, Dimitri Rogoff told press agency AFP: “There’s no question of violence. It’s about showing ourselves, showing that our fishermen are determined; to underline what has been asked for.”

The deputy director of an organisation for Normandy fishermen, Mathieu Vimard, told BBC Radio 4: “It’s a big surprise to see all the ships waiting for licences.

“Those who got the licence last weekend have special conditions like maximum fishing days per year or different technical measures.

“If the Jersey government meant this position, you will kill 70% of the French fleet.”

However Jersey’s external relations minister, Ian Gorst, has insisted they are following rules in the Brexit deal and are waiting for more ‘evidence’ from ships to whom they have not yet allocated licences.

Its environment minister, Gregory Guida, has said that they gave out the licences so far “based on the documents provided by the French authorities so as to determine the rights of each ship”, adding that the documents “were of very poor quality but we respected the terms of the deal”.

He added if any fishermen had additional documents they wished to present, they were ready to review their rights.

UK Prime Minister Boris Johnson yesterday spoke of his “unwavering support” for the island and a Downing Street spokesman has stated the UK and Jersey governments will “continue to work closely on this issue”.

The French government says however the new regime that started on Friday last week is unfair and unacceptable.

It says the approved list so far was accompanied by new requirements “that have not been agreed on, discussed or notified before”.

Ms Girardin said in a tweet that “we are standing alongside our fishermen who depend on access to the British waters”.

She added: “Our neighbours are imposing criteria that do not belong to the post-Brexit deal. The law is clear, the conventions must be respected. We will be making sure that the deal signed at the end of 2020 is too.”

She has said that not all the expected licences have been issued and “we will not allow new criteria to be imposed”.

The Connexion is hiring an experienced journalist
20 September 2021
More from Brexit
More from Connexion
Get news, views and information from France
Join the newsletter
Subscribe to The Connexion