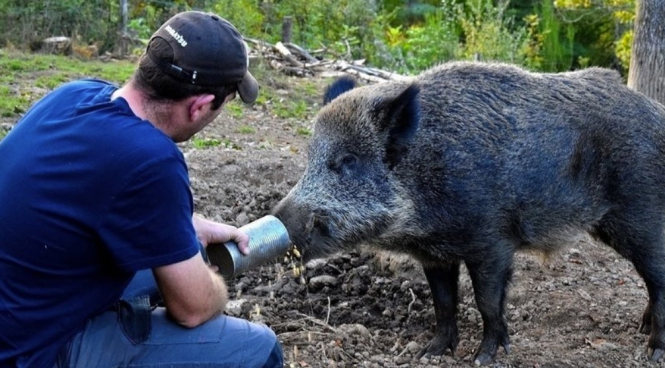 The actress, who runs the eponymous animal protection association la Fondation Brigitte Bardot, demanded that the prefect of Corrèze (Nouvelle-Aquitaine) allow local woman Sylvia Bachellerie to keep her unusual animal, which is domesticated, and named Maurice.

Ms Bachellerie first adopted the boar in 2014, when it was just a few days old, after it had been injured on the road in front of her house. She took care of it and later tried to release it back into the wild, but the boar did not want to leave.

Now, the animal weighs around 100 kilos, but Ms Bachellerie continues to care for him in a purpose-built enclosure in her garden at home.

Authorities were first alerted to Ms Bachellerie's unusual pet in 2019, after an anonymous tip-off from someone in the local community. Normally, keeping a wild animal as a pet is illegal.

At that point, Ms Bachellerie requested authorisation to keep a wild animal at home, but this was refused - according to the Fondation Brigitte Bardot - with authorities citing the “illegal origin of the boar”.

Now, Ms Bachellerie faces the possibility of being ordered either to find a “space that conforms” or having to euthanise her own pet.

The case ruling had been due on May 20, but was delayed due to confinement, and Maurice is still being cared for by Ms Bachellerie in his usual domestic enclosure in her garden.

The cause has now been taken up by la Fondation Brigitte Bardot. In an open letter to authorities, Ms Bardot said the issue was about “the survival of this animal”.

She wrote: “My foundation does not mean to allow individuals to keep wild animals; on the contrary. But in this case, however, it is too late to rehabilitate this animal in the wild, and we must intervene so that a humane and satisfying solution is found for everyone.

“[Previously] the ministries of ecology and agriculture have made exceptions when it comes to keeping a single boar [by an individual], so why refuse to grant [a similar exception] in this case, and condemn this animal to death?”

Ms Bachellerie has also launched her own online petition, named “Sauvez Maurice [Save Maurice]”, which has so far gathered almost 113,000 signatures at the time of writing.

On the page, she writes: “We fed [Maurice] with a bottle and raised him. We have built him a beautiful enclosure...we wish to keep him as he is part of the family.”

From one Maurice to another

The case of Maurice the boar comes as it was announced that Maurice the cockerel - the famous French cockerel who made global headlines and sparked a countryside movement after neighbours complained about the noise of his crowing - has died.

Corinne Fesseau, Ile d’Oléron (Charente-Maritime) resident and owner, said: “He died from [poultry infection] coryza last month during confinement. We found him dead at the foot of the hen house. We did everything we could.”

Ms Fesseau said she waited until the end of confinement to announce the news, because “Covid was more important than my cockerel”.

However, she added: “Maurice was an emblem, a symbol of rural life, a hero.”

Maurice’s case last summer captured many people's imagination, and even prompted MPs to consider a bill to make rural sounds and aromas part of the “sensory heritage of the countryside”.

At the time, the cultural affairs committee said that rooster crowing, bell ringing and “olfactory emissions from natural spaces and environments" are "an integral part of rural life" and must be included in the heritage code.

This would protect them from complaints by countryside residents, visitors, and second-home owners in rural France.

The bill also came after numerous reports that visitors to countryside areas in France were regularly complaining about normal rural noises, such as cowbells, pond frogs, early morning church bells, and - of course - cockerel crowing.

9 hours ago
3
French farmhouse renovation: DIY tricks to get rid of rats