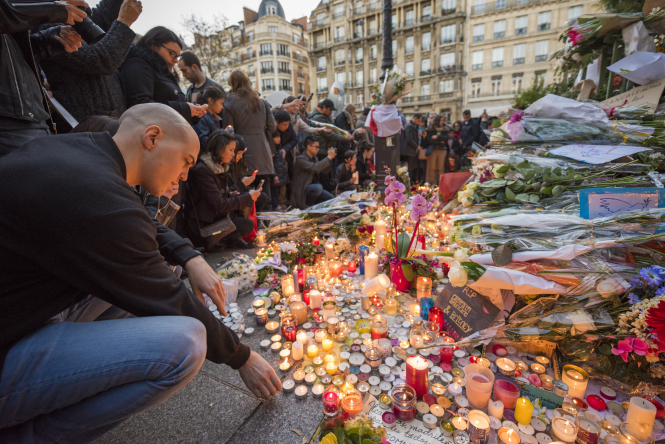 A man lights a candle in front of the Bataclan theatre, where 90 people were killed during the November 13 attacks Pic: Frederic Legrand - COMEO / Shutterstock

A British man will testify next week at the trial of 20 people accused of involvement in the 2015 terrorist attacks at the Bataclan concert venue, the Stade de France, and at several bars and cafés in Paris.

Michael O'Connor was present at the Bataclan on November 13, 2015. He will testify as a civil party during the trial, which opens on September 8.

The November 13 attacks are the deadliest in the history of France, with more than 130 people killed and several hundred injured.

Of the 20 defendants in the trial, 14 will be physically present, including the French-Moroccan man Salah Abdeslam, thought to be the only surviving member of the group directly involved in the attacks.

Nearly 1,800 civil parties have filed a complaint in this trial. Among them is British citizen Mr O'Connor.

Mr O’Connor was living in Lyon at the time with his French partner, Sara Badel. His trip to Paris on November 13, 2015 was his first time in the French capital.

He went with Ms Badel to the Eagles of Death Metal concert at the Bataclan, even though he "wasn't really a big fan of the band,” he told France Inter.

He said, though, that he was happy to spend "a romantic weekend" in the French capital.

But then everything changed. While he was dancing and "having a really good time"  during the song Kiss the Devil, gun fire broke out.

Mr O'Connor and Ms Badel hit the floor and lay on top of each other, trying to remain hidden and playing dead until the French special police arrived. Neither were physically injured.

After the attack, Mr O’Connor’s relationship with his partner went downhill. He tried to find an English-speaking psychologist in France, without success. He said that talking about such difficult things in French “was too complicated".

"I couldn't get access to the services I needed," he said.

He eventually returned to Newcastle in the UK, one year after the attacks.

He struggled then to understand the events and the legal proceedings involved in the trial and investigation, with the language barrier making it hard.

"I couldn't call my lawyers every time I didn't understand something. So I tried with Google translate, but it wasn't very definitive," he said.

Life for Paris, an association set up to help victims of the November 13 attack, has translated many documents into English, Spanish and German.

However, during the trial, interpreters will only intervene when the victims are testifying on the stand, according to the civil parties' lawyers Clémence Witt and Jeanne Sulzer.

"During the three information meetings with civil parties during the investigation, interpreters were systematically provided for foreign victims," Ms Witt told France Inter.

"I didn't think it would be different [at the trial] and that there would be tension as the hearing approached, especially as interpretation is a requirement expressly provided for by European law," the lawyer told France Inter journalists.

Eight languages will eventually be translated at the trial: English, Spanish, German, Italian, Romanian, Turkish, Serbo-Croatian and Egyptian. There are 23 different nationalities among the hundreds of victims of the November 13 terrorist attacks.

Mr O'Connor said he wanted to attend the trial and "be as active as possible".

"I would like to explain the impact that the attacks had on my life, but also the effects of the Paris event on an international level," he said.

The investigation of the trial of the attacks lasted four and a half years and the file has more than 500 volumes, or more than 47,000 minutes, which would representent a pile 53 metres high.

A courtroom was specially built in the Palais de Justice courthouse to accommodate all the people attending the hearings, including over 300 lawyers.

A dozen other rooms have been equipped with video screens to allow all those involved to follow the proceedings live, for a total capacity of 2,000 people at the court of appeal, according to Le Monde.

The trial will be filmed and recorded by ten cameras.