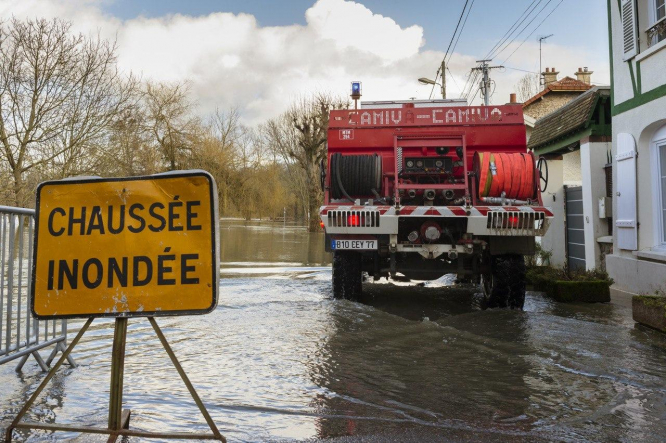 The department of Gard was placed under a red storm warning this morning, while six other departments were on orange alert Pic: Sécurité Civile via Twitter

[Update on September 14 at 17:00: Two people have now been reported missing in the towns of Aigues-Vives and Uchaud (Gard).]

Gard in south-east France (Occitanie) was placed under a red storm and flooding alert by Météo France this morning, as nearly two months’ worth of rain fell over six hours.

Gard had already been placed under an orange alert along with Aveyron, Haute-Garonne, Hérault, Lot, Tarn and Tarn-et-Garonne earlier on. Hérault's alert level has now been downgraded to yellow.

Around 184mm fell in three hours in Saint-Dionisy to the west of Nîmes, with 111mm coming down in a single hour.

France’s state weather service only imposes a red warning when weather conditions are considered “dangerous and of an exceptional level of intensity.”

The red alert means that people should stay at home or in a secure building and avoid using their phones or driving their cars if possible.

Gard has now been taken off the red warning, but it still on orange alert, the risk of storms remaining "moderate to strong."

The situation in Gard

At midday, Gard’s fire and rescue service said that it had not yet carried out “any significant related interventions.” However, 23 people who had become trapped in their cars had been returned to safety and around 70 non-urgent cases of flooding had been reported.

More than 30 firefighters specialising in water rescues have been mobilised around Gard.

Several have been stationed on the A9, where there are drivers in difficulty around Langlade.

As of 14:00, other firefighters are at the Caissargues Intermarché where the roof has collapsed.

In Corconne on the border with Hérault, the local weather service Météo Gard Hérault has shown an image of a car overturned in a river of mud.

Several roads in Milhaud near Nîmes have also been flooded. The local school has contacted families telling them that the children are safe inside and advising that they do not try and collect them.

The A9 motorway between Montpellier and Nîmes is flooded around Gallargues and the TER train service between the two cities is also disrupted.

Roads have also been flooded around Vauvert, Saint-Gilles, Sommières, Calvisson and Quissac, with several bridges submerged under the Vidourle River, which has risen by 35cm.

The exact details of the roads affected can be found on Inforoute Gard.

In Quissac, to the north of Montpellier, water has started to enter one of the classrooms of a local collège. The children were said to be safe but the prefecture asked parents not to come and collect them but to wait for conditions to improve.

According to the observatory Kéraunos, over the course of this morning there had been 19,000 lightning flashes recorded in the Gard, with 1,300 in Nîmes alone.

In the town of Vergèze, residents reported hailstones of 4cm in diameter falling earlier this morning.

One week ago, the town of Agen in Lot-et-Garonne was hit by severe flooding after two months’ worth of rain fell in 24 hours.