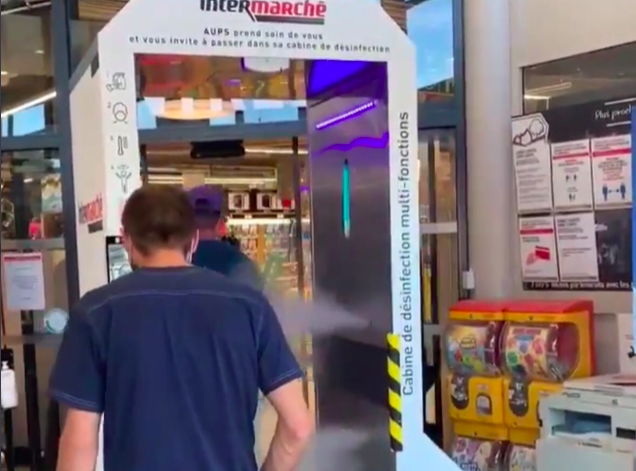 Shoppers pass through a new disinfectant door to enter an Intermarché supermarket in France.
By Joanna York

The disinfectant door has been installed as a “test” since the beginning of September in the Intermarché supermarket in Monastier-sur-Gazeille, Haute-Loire (Auvergne-Rhône-Alpes).

Shoppers who choose to pass through the door to enter the supermarket are misted with a disinfectant spray.

Store manager David Accaries told France 3 the door was installed to make sure customers felt safe when visiting the supermarket. He said that in the wake of the Covid-19 crisis: “People were afraid, they were panicking. We didn’t know if we had to wear masks, we didn’t know what was going on. It was total uncertainty. We had a very difficult time.”

The door has been installed as a test but Mr Accaries believes it could provide useful in the long-term. He said: “It’s something we can reuse in 'flu season, if there are stomach bugs going around, and all year.”

Customers, however, have mixed reactions. One told France 3: “I think it’s really good. We should see more things like this.”

Another said: “Would you put up a door like this for the 'flu? Or common colds? No!”

According to figures released by Santé Publique France (SPF) yesterday (September 7), 4,203 new cases of Covid-19 were recorded in the previous 24 hours.

This marks a reduction on the previous three days during which daily numbers were between 7,000 and almost 9,000.

However, the rate of positivity, meaning the percentage of all tests taken in the previous 7 days that come back positive, has now risen to 5.1%. At the end of August it was around 3.9%.

SPF figures show 58 new clusters have also been identified and 25 new deaths were recorded in the past 24 hours.

Despite this French health minister Olivier Véran has confirmed that government advisory body the Conseil Scientifique is in favour of reducing Covid-19 quarantines from 14 to 7 days.

Mr Véran told news source France Inter: “People are primarily contagious in the first five days following the appearance of symptoms or a positive test. Then the level of contagiousness goes down very significantly. Beyond one week, it is still there but is very weak.

“Reality shows us that a large number of people in France do not respect quarantine rules. People will stick to the rules better if the time period is reduced. However, this shorter period must be absolutely respected, to limit contagion.”

There is no official data on how many people break 14-day quarantine rules in France. However, newspaper Le Journal du Dimanche has reported that track and trace authorities in France have found an increasing number of people are doing so.

A reduction in quarantine duration will be discussed by the government on Friday September 11, it has said.

Long waits for covid tests cause tension in France