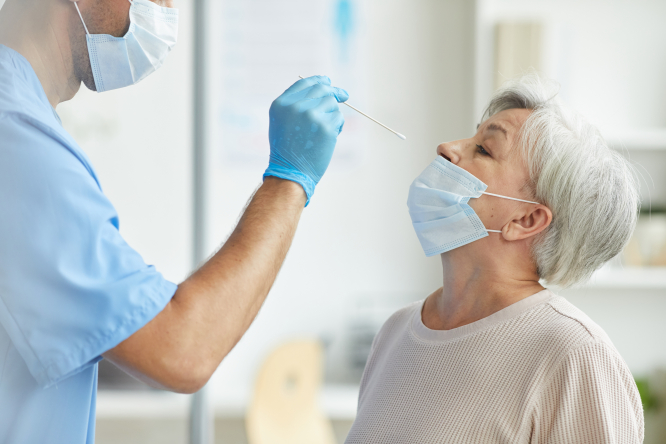 In the first week of October the incidence rate went up in several departments in France Pic: SeventyFour / Shutterstock

Weekly Covid cases have risen in France for the first time since mid-August, new figures show.

The seven-day average of daily cases rose by 11% between October 8-14 compared to the week before, up to an average of 4,600 cases per day, figures from CovidTracker released on the evening of October 17 show.

While the number of daily positive cases is still relatively low, it is two times higher than the rate in June 2021 at the end of the last confinement in France, and it is the first increase in weekly cases since mid-August.

The latest daily figures show that on October 17 there were 3,778 cases recorded in the previous 24 hours. Figures are often slightly lower on Monday due to fewer tests being done over the weekend.

However, the site CovidTracker has reported that the overall number of tests being done in France has remained stable, meaning that the rise in Covid cases is not down to an increase in testing

As access to free “comfort” tests taken for non-medical reasons was stopped on October 15, it is possible that the rate of testing will actually go down this week.

Read more: Who has to pay for Covid tests in France from today and how much?

Rising cases concentrated in some departments

So far, the highest case numbers are concentrated in some departments, with the highest incidence rate (number of cases per 100,000 inhabitants over seven days) reported in Bouches-du-Rhône, at 105.7 between October 7 and October 13.

La Dépêche website has a map showing where the incidence rates are the highest.

The French government has said it “expected” a rise in cases in winter, and so far increasing case numbers are not reflected in rising admissions to hospitals.

Figures from SPF from October 17 show that 1,289 people were hospitalised with Covid in the past week and five Covid patients died in the past 24 hours.

However, if cases continue to rise, it is unknown whether France will follow the UKs lead in ‘living with the virus’ this winter.

The UK is currently reporting more than 40,000 daily Covid cases and 100-150 deaths, with 700 Covid patients being hospitalised every day, but has not issued new rules to reduce the spread of the virus.

This comes as a new law could mean that the use of the health pass will be reduced in departments with lower levels of Covid.

The law currently being passed through parliament plans to extend possible use of the health pass to July 31, 2022, but an amendment suggested by LREM MP Pacôme Rupin would mean that the pass can only be used in departments where the incidence rate is over 50.

This is currently the case in 20 departments in France.

Mr Rupin said: “We cannot give the government total licence to use the health pass with a minimum of rules. I think we need to have some criteria [for use] either such as this, or something stricter.”

His proposal will be discussed during a review of the potential law in the Assemblée Nationale on Tuesday, October 19.