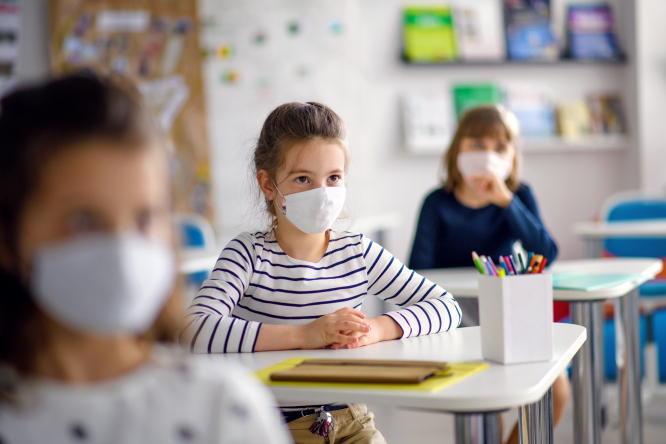 The Education Ministry has been criticised for making Covid health protocols for the return to school not clear or safe enough by teaching unions.

Parents and teachers have been waiting for clarification on new measures for la rentrée on September 2 for weeks.

The Education Ministry revealed in July that a four-level system will be used for the coming academic year with different rules for mask-wearing, playing sports and social distancing at each level.

Schools will be placed on different levels according to the health situation nationally.

Yesterday (August 22), Education Minister Jean-Michel Blanquer announced that schools would go back on a level 2, or yellow, rating on September 2.

Health passes will not be required for pupils or staff to attend school at any level.

Mr Blanquer told Le Journal du Dimanche using level 2 rules would allow “a return to school that is as normal as possible, with pupils in class, while preserving everyone’s health”.

But spokesperson for teachers’ union SNUipp-FSU, Guislaine David, said the rules for September were “unclear and not reassuring”.

She told FranceInfo: “We are not in the same situation as when school finished in July. Since then, circulation of the Delta variant has increased, and the incidence rate among children under 10 is significant.

“But now we have health protocols that are less strict than the ones schools were using at the end of July.”

Mr Blanquer also gave more details of a targeted vaccine campaign that will begin for pupils aged over 12 in collèges and lycées.

Currently 56% of children aged 12-17 are vaccinated, figures from August 19 show.

The health minister said: “In all collèges and lycées, pupils and staff will have access to vaccination nearby or in their school.

“Either vaccination teams will come to give vaccinations in schools, or we will organise trips to vaccination centres on a voluntary basis.”

Older pupils’ vaccination status will define whether or not they can study in school in person.

At collèges and lycées, pupils who are identified as contact cases will be able to continue coming to school in person if they are vaccinated, but will have to study at home for seven days if they are not vaccinated.

Primary schools will use the same rules as in the last academic year – if a pupil is identified as a contact case their class will close for seven days and all pupils will study remotely.

Mr Blanquer said that pupils would be able to prove their vaccine status with a written statement from their parents or guardians.

Health passes to be used for school trips from September 30

From September 30, children over 12 will be required to use the health pass to enter many public spaces in France, raising questions over how unvaccinated pupils will be able to attend school trips to places such as museums without having to pay for a Covid test in advance.

The health minister said that, for now, pupils would not be asked for health passes in places where the school had reserved a time slot meaning that other members of the public would not be present.

From September 30, eligible pupils will have to show health passes in all spaces where they are required.

She said: “When pupils go out in a group, they use a coach. If multiple classes are using the same coach, that means they are not social distancing. How are we going to manage school trips?”

She also raised concerns about safety for parents when bringing their children to school ­– typically a moment when large numbers of people gather at school gates.

She asked why stricter protocols were not being applied to prevent pupils mixing during meal and break times in departments where case numbers were particularly high.

She said: “Is this reasonable when the virus is circulating at very high levels in some departments? There is no distinction between different departments and different health protocols.”