Covid vaccine in maiden name, passport in married name: what to try 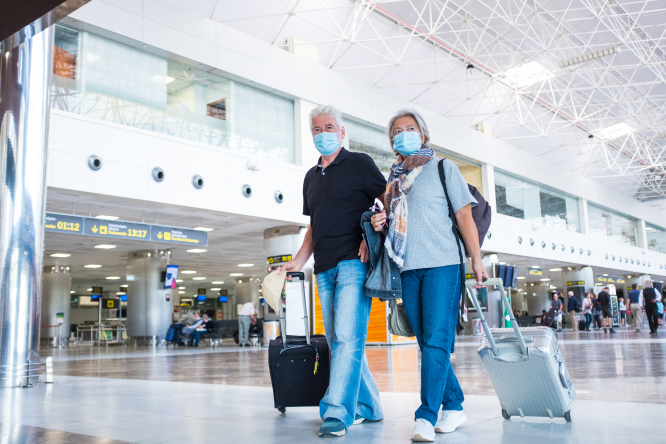 British women vaccinated in France continue to experience problems when travelling because their vaccination documents show their maiden name while their passport shows their married name. Pic: Perfect Wave / Shutterstock

[Update November 24 at 15:00 - If you have access to a document called 'Données télétransmises à l'Assurance Maladie' given to you when you received your vaccination, this may have both your maiden and married name displayed.]

British women who are vaccinated in France continue to experience problems when travelling because their vaccination documents show their maiden name while their passport shows their married name.

Why is this a problem?

However, depending on their nationality their travel documents will often be in their married name, especially if the woman in question has a UK or US passport, which do not generally include one’s birth name as well.

For French women, whose passports often remain in their maiden name, this should not generally present a problem.

However, many Connexion readers have encountered difficulties when trying to travel abroad because the names on the two documents do not match up.

Can you get the name changed on your vaccination documents?

The French Health Ministry has previously confirmed to The Connexion that it should be possible to request a new certificate carrying one’s married name (nom d’épouse or d’usage) from a vaccination centre or pharmacy.

A Health Ministry spokesperson said: “You need to see your doctor, pharmacist or vaccination centre so they can modify the patient information – ie the birth name / married name – so as to supply you with a new vaccination certificate.”

You may have to ask the healthcare centre to “supprimer mon cycle vaccinal” (delete my vaccination programme [record]) and to create a new one with the right name and all the other information contained in the original document.

This can often only be done if the social security number is not entered into the form, as this is automatically linked to one’s maiden name.

There are vaccination centres and pharmacies where staff will produce a new certificate for you. There is a discussion on an Ameli forum where contributors detail the locations of some of the establishments where this is possible.

One of the forum contributors also suggests that women living in France ask for help from their GP, who may be able to change the certificate for them.

However, many vaccination centres and pharmacies have refused to modify existing vaccination certificates, saying that it is not possible.

If a healthcare professional tells you that it is normal for a maiden name to appear on a vaccination certificate and that they cannot change it, you can prove that this is not the case.

The contents of EU Digital Covid Certificates are detailed under EU regulation 2021/953, which states in English that the documents should include a person’s “surname”.

However, the French translation of the law originally used the phrase “nom de famille,” which according to the government information service Service-public.fr is the name stated on your birth certificate. Married names can be “used in daily life” but “do not replace the nom de famille.”

This French phrasing was later amended to “nom” in an update to the regulation, so allowing for married names to be used as well.

Vaccination centres should by now be aware of this adjustment, but this is obviously not the case for some.

The Health Ministry has not responded to requests for further information on what can be done if vaccination centres refuse to change the documents.

If you have not already had both vaccination doses, it may be possible to enter your married and maiden name into your vaccination record in the format: ‘XX née XX’.

The British consular services recommend taking extra documents such as marriage certificates to the airport or port to prove identity, and some women have reported that this has worked for them.

If your marriage certificate will not work, some cartes de séjour have a woman’s married and maiden name written on them, although this is not always the case.

We asked the major ferry operators and airlines offering routes between the UK and France for their advice on this issue.

A spokesperson for British Airways has previously told The Connexion that “if a customer can show proof of a marriage certificate with their maiden name, we would accept them for travel with a vaccine certificate that differs from their travel documentation.”

Several women have indeed reported being able to fly using their marriage certificate, but we have now heard from three women who have been refused.

One reader, Valerie Young, was turned away from a flight to Canada on November 1. She has been offered a refund or alternative flight by the airline despite a spokesperson later confirming to her that: “Generally a marriage certificate is proof enough to allow customers to travel.”

A spokesperson said that Ms Young was refused boarding because of a “mistake” made by staff at the airport and that “we're sorry for the customer's recent experience and we're in contact with them.”

He said it was due to a “nuance” in this particular case but did not give further details.

A spokesperson for EasyJet told The Connexion that: “We ask passengers to provide a supporting document which matches the document name and date of birth, such as a marriage certificate in order that we can determine identity.”

One Connexion reader has reported being able to travel with EasyJet without any problems despite the discrepancy between the names on her vaccination and travel documents.

A spokesperson for Brittany Ferries told The Connexion that: “If the passenger has an additional document proving their identity, such as a marriage certificate bearing both her maiden and married name, it is not an issue for us at all.”

Connexion readers have also said that Brittany Ferries staff were happy to accept their marriage certificates as proof of their name being changed.

Irish Ferries said it was “not able to comment” on this issue.

A DFDS spokesperson told The Connexion that the company “has been regularly updating its advice to staff at check in throughout the pandemic to ensure that all documentation is checked in line with advice from the UK and French governments. The company’s advice to customers follows the advice provided by the UK government.

“This states that if a passenger’s vaccination certificate shows a different name to the one shown on the passport, that the passenger should carry with them additional documentation, such as a marriage certificate, when travelling.

“This will then be sufficient to complete document checks at the border prior to travelling.

“If a passenger is refused boarding despite having supporting documentation showing both her maiden and married name, then she should request to speak to a senior manager, who will be able to assist and resolve the issue at the time.

“However, [...] this should not be required as all DFDS check in staff are trained and updated on the latest UK and French government travel requirements and should accept the marriage certificate as sufficient proof of identity.”

We also repeatedly contacted Air France-KLM, Ryanair and Eurotunnel about this issue, but have not yet received a response.

We have, however, heard reports of women being able to travel via Eurotunnel without encountering any issues.

Depending on their destination country, some women who encounter issues with vaccination certificates and travel documents showing different names may still be able to fly if they take a pre-departure test and follow the restrictions imposed on unvaccinated people.