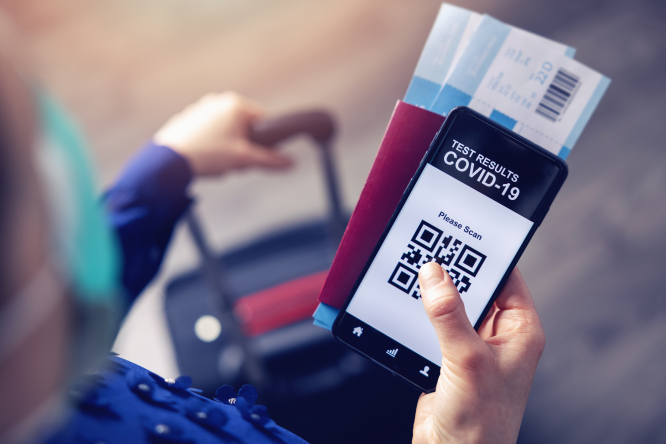 If a customer can show proof of a marriage certificate with their maiden name, they would be accepted for travel with a vaccine certificate that differs from their travel documentation Pic: ronstik / Shutterstock

A British woman who lives in France was initially denied boarding on a British Airways flight from Newcastle to Toulouse because her French Covid vaccine certificate shows only her maiden name and does not match her married name on her UK passport.

Amanda Redfern was told by BA staff before her flight on September 12 that they could not accept her vaccination certificate.

This is despite her showing her birth certificate, marriage certificate, her French carte de séjour and driving licence - which have both her maiden name De Motte and married name on them - and various other documents identifying her.

A spokesperson for BA told The Connexion today (September 15) that generally if a customer can show proof of a marriage certificate with their maiden name, they would be accepted for travel with a vaccine certificate that differs from their travel documentation.

The spokesperson added: "Of course we apologise if this wasn’t followed in this particular scenario and we have passed this on to the relevant team."

Mrs Redfern, 65, who lives in the Hautes-Pyrénées, was only able to take the flight as she had gone to the airport early, fearing travel issues, and had enough time to take a Covid test.

She said that her husband, Neil Redfern, a Gold Executive Club member with BA, complained to customer service about the situation before the flight.

He was told that there was no way for BA to accept Mrs Redfern’s vaccination certificate.

Mrs Redfern said the experience was “stressful and upsetting”, and that she feels abandoned by French authorities and the British Embassy in France, who have not helped her to solve the issue.

“It is blatant discrimination against British married women,” she said.

“It should not be like this. This certificate was supposed to make travel easier, but instead, it has closed my world down.

“It would have been disastrous for me and my husband if we did not get that flight, as we have dogs back in France and our car park charge at Toulouse airport would have been astronomical.”

Mrs Redfern has two grandchildren in the UK, including one born last week, and says the situation with the maiden name makes her feel that she will be stuck in France and unable to visit them.

Mrs Redfern’s refusal is the first time The Connexion has heard of a passenger being denied boarding due to the maiden name issue.

What is the maiden name issue?

It is caused by the fact that in France, it is common practice for maiden names to appear on official documents.

Most women have their maiden name listed in France’s social security database, and the Covid vaccine certificates are generated by pulling data from this database, resulting in maiden names appearing on the certificates rather than current names.

However, British passports only include a person’s current name and do not include details of their maiden name, unlike French passports.

The Connexion has raised this issue several times with the French health ministry.

A spokesperson has said previously that a person in this situation can get their vaccination certificate modified.

““You need to see your doctor, pharmacist or vaccination centre so they can modify the patient information – i.e. the birth name / married name – so as to supply you with a new vaccination certificate,” the spokesperson said.

They did not respond when asked what the person should do if local health authorities refuse to change the certificate.

Mrs Redfern said she has tried twice with her local health insurance office (CPAM) to see about changing her certificate. She said that while staff there were sympathetic, they told her they were unable to modify the certificates under French rules.

There has been added confusion due to the fact that the Assurance maladie website ameli.com continues to state that it is “normal” for the married name not to appear and for it only to have the birth name.

The website adds: “This is the norm that will be adopted for the future European vaccination certificate that will come into force on July 1, 2021.”

The European Commission, however, previously told The Connexion this is not the case, and on the contrary, they are asking that certificates be issued with the name shown on ID cards or passports.

It is stated in the European Commission document ‘JSON Scheme for EU Digital COVID Certificates’ - published here (scroll down until you see the PDF with the appropriate title) - that:

“Person name is the official full name of the person, matching the name stated on travel documents.”

Mrs Redfern said that she believes France’s central government must take more decisive action in raising this issue to local health authorities so they are aware of the problem.

One unofficial solution to the issue, as described here in The Connexion, is to ask a local healthcare professional with access to the Covid vaccine database to remove the social security number from the certificate, and then re-issue it with the woman’s current name.

Mrs Redfern said she did not want to get her social security number removed from her French vaccination certificate because she is concerned it may cause issues if she gets a booster dose later.

Mrs Redfern said that she has put in a formal complaint about the boarding refusal to BA.

If you or anyone you know has also been affected by this issue, please let us know at news@connexionfrance.com.