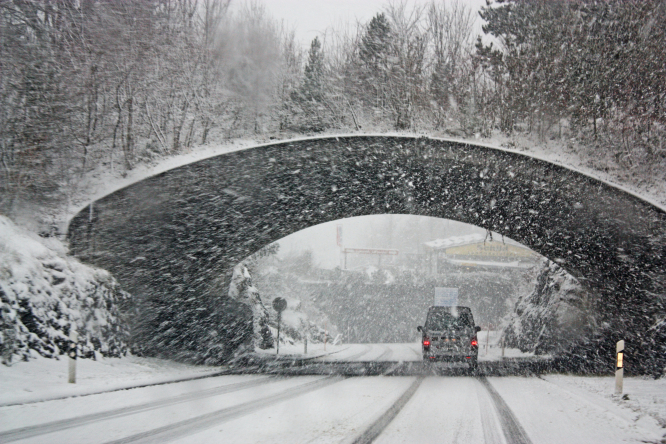 Snow tyres are not yet mandatory in France, but are strongly advised by experts for driving in snowy conditions
By Joanna York

Driving warnings have been issued after heavy snowfall and icy conditions were forecast in north-east France for last night and today.

The 10 departments are affected by what Météo France described as a “remarkable” amount of snow - with up 20cm expected in some places.

Tips for driving in snow

Driving in snow can be slow, and putting a strict time limit on your journey will cause extra stress. Factor in potential hold-ups and slower driving speeds before you set off.

For guidance, motorway driving speeds can be reduced to 50kmph when visibility is reduced after heavy snowfall.

Use your brake pedal

Even though you may be worried the car will slide on icy roads, using the brake pedal is still the only reliable way to slow the speed of your vehicle.

Paul Santos, driving instructor in Haute-Savoie told news source BFMTV: “If you need to slow down, increase your safety distance and predict breaking in advance.”

Engine braking means slowing your car by releasing the accelerator, rather than stepping on the gas pedal – but this should be avoided in snowy conditions.

Look for ways out

In an emergency situation, rather than focusing on obstacles in your way try instead to look for safe escape routes.

Mr Santos said: “Our eyes control all the decisions we make when driving. It is natural to move your car into the right place, if you’re looking in the right place.”

These are what Mr Santos describes as “the best solution” for driving safely in the snow.

Snow tyres are highly effective for driving in snow - as they decrease braking speeds - and in temperatures below 7C in general.

“There is a real risk if you go out with summer tyres because they are not ideal [for the circumstances], and you may encounter road closures, traffic jams and other traffic problems,” Mr Santos said.

Snow tyres mandatory by end of 2021

Although there is currently no legal obligation to use snow tyres in France, this is set to be introduced in 48 departments in mountainous regions from November 1, 2021. Similar laws are already in place in Switzerland and Germany.

Snow tyres are visibly different to summer tyres as they have larger, deeper grooves. They can also be identified by a symbol known as 3PMSF, or 3 Peak Mountain Snow Flake, which shows three mountain peaks and a snowflake, which verifies that they conform to industry standards.

Another marking known as M+S – mud and snow – can also indicate a snow tyre, but tyres with this marking have not been tested at the same level as 3PMSF tyres.

From November 2021, tyres with either 3PMSF or M+S markings will be legally accepted as snow tyres, but M+S tyres will be phased out by 2024.

Current advice is to put snow tyres on in September or October until March – following roughly the same timetable as the spring and autumn clock changes. While the law currently only stipulates that snow tyres should be put on the two back wheels, experts advise that people change all four tyres.

Although the law will only cover 48 departments, experts also advise that those who travel into those departments change their tyres.

Michael Poirier, sales director at tyres company Nokian Tyres, told BFMTV: “If you take, for example, the departments of Alpes Maritimes or Isère, with large cities like Nice and Grenoble that are close to ski stations, it seems impossible that [people there] could use summer tyres all year round.

“If, between November and March, someone invites you to dinner in Auron ski station, you’re not going to take out the map only to find out at the last minute that snow tyres are mandatory there, or that you will pass through other communes where they are.”

Below usual cold spell expected to return this weekend

Fears for ski season as lifts stay closed in France