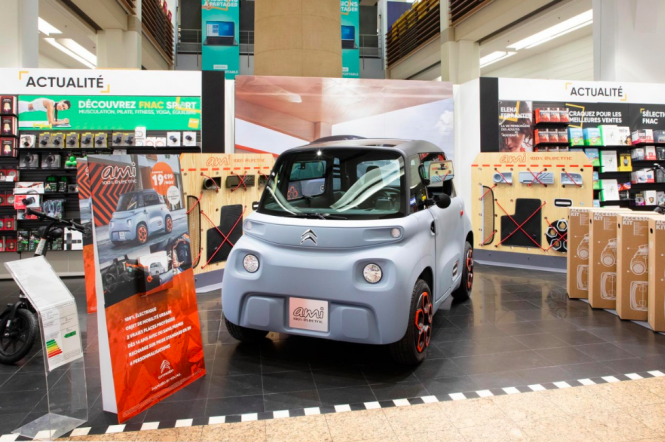 The Citroën AMI is an electric car on sale in Fnac and Darty stores in France.
By Joanna York

The Citroën AMI has already sold 500 units in France since it became available to order on May 11.

It will now be available to purchase in France from book and media store Fnac and household electrical store Darty.

The car is 100% electric and measures only 2.41 metres long. It can be driven without a driving licence, by those aged 14 and over

The Ami, joins the Renault Twizy in the sans-permis category of electric vehicles.

The Twizy sells for €7,540 in its low-power version with a five horsepower motor, available to people without a driver's licence, to which must be added a €45 monthly charge for the battery. It has a top speed of 45 km/hr.

Without battery hire, the Twizy45  starts at €10,000. A €900 government bonus to encourage people to use electric vehicles can be taken off the price for most buyers.

A more powerful 15 horsepower version, able to travel at 80kph, with a 15 horsepower motor sells for €8,240 in its base version with battery hire costing €49 a month. When the battery is included its price is €10,700, and this version, for which a driving licence is required, also gets a €900 bonus for most people.

The Renault Twizy is also used by various electric-car mobility schemes, including the Moov’in scheme in Paris operated by Renault and ADE.

French retailer Fnac is better known for selling cultural goods such as books, music, and tickets for events, as well as electronics such as cameras and televisions. Darty, meanwhile, primarily sells consumer electronics such as household appliances and telecommunications products.

The two retailers are part of the Fnac Darty group. In a statement they said they aimed to “step up” their presence in the urban mobility market by selling the electric car.

Oliver Garcia, product director at Fnac Darty, said: “Electric mobility is a significant new market that is very dynamic. We have seen this with electric scooters. Last year more than 400,000 electric scooters were sold in France.”

A statement released by Citroën said that selling the AMI in Fnac and Darty was a move to “reinvent the codes of normal distribution and meet the needs of consumers looking for new mobility solutions that are responsible and adapted to urban environments".

The car has been on display in 39 stores in Paris (Ile-de-France), Lyon (Auvergne-Rhône-Alpes) and Bordeaux (Nouvelle-Aquitaine) since June 15.

From mid-July, customers will be able to test drive the car in Fnac and Darty stores, by appointment.