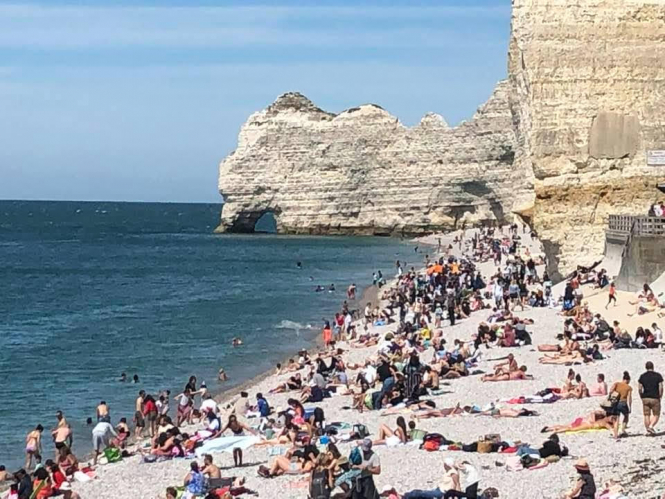 The small town of Etretat in Normandy - whose population is around 1,200 - receives 1.5 million visitors a year. Pic: Cosmo Danchin / Zéro Mégot Etretat

Residents in the small Normandy town Etretat are calling for better management of the thousands of tourists who come each day to see its well-known cliffs, especially after they were made even more popular by globally successful Netflix series Lupin.

Etretat’s population totals 1,200 permanent and 5,000 part-time residents but the town of 4.4 square kilometres receives upwards of 1.2 million visitors per year, or around 3,500 per day.

The local tourist office recorded a 21% rise in the number of visitors coming through their doors in the first seven months of 2021 compared to the same period in 2020 – likely to be in part due to Lupin, released in the first half of 2021, though last year's lockdown may also have played a part.

Of the thousands of tourists who visit Etretat every day, many climb up onto the cliffs, causing a gradual erosion of the ground.

Etretat’s mayor André Baillard told Belgian television broadcaster RTBF this week that the mairie may soon be “obliged to prohibit” access to the cliffs for at least five years, allowing them to return to their natural state.

Resident Cosmo Danchin, who launched a petition for action, says the unending wave of people is leaving local bins overflowing, streets crammed with inconsiderately parked cars and emergency services stretched by tourists getting themselves into difficulties out at sea.

“Etretat, jewel of the Alabaster Coast that the urban community of Le Havre uses to raise its profile and attract tourists, is losing its residents and its soul,” Ms Danchin wrote in her petition.

“[The town’s] inhabitants are tired, powerless, forgotten and at risk.

“An incessant influx of tourists, motorcyclists, campervans and cars fill the narrow streets, and the place becomes a theme park with no rules, no safety measures and no management.

“Successive mairies have found themselves overwhelmed, no longer feeling capable of confronting all the problems that continue to grow year on year, particularly in the context of the pandemic, when tourists are unable to travel abroad.”

Ms Danchin has called for the introduction of properly pedestrianised zones, as well as a ban on non-resident vehicle access in the town centre on weekends and school holidays.

“During the pandemic, in February, the number of visitors was really enormous for the time of year and nothing was done to help host all of them, especially considering that restaurants were closed at the time,” Ms Danchin told The Connexion.

“The whole situation was so hellish that people started to tell me that they were going to sell their house and move elsewhere.”

Ms Danchin added that, for her, this was the straw that broke the camel’s back. “It broke my heart; we were all complaining but none of us was actually doing anything about it.

“Enough was enough. The precedent that we were seeing being set in Etretat was not exclusive to us: it was happening all over the world in lots of small towns, because tourism is changing, especially with the influence of social media.

“I wrote the petition and within three days we had about 15,000 signatures.”

Since then, Ms Danchin says that she and others have tried to take the matter to local authorities and the former prime minister and mayor of Le Havre Edouard Philippe, but have only received “vague” responses.

However, she said that they had “definitely made progress regarding waste,” adding that Etretat’s streets are now cleaned more frequently, the local authority having asked for more funding to deal with this.

Ms Danchin is also president of Zéro Mégot Etretat (“Zero Cigarette Ends in Etretat”), which has developed a system aimed at encouraging locals and tourists to help clear up the litter left by the town’s visitors.

Through the ‘bottle challenge’, people are encouraged to collect a bottleful of cigarette butts, which they can exchange for rewards including a cocktail at an Etretat bar.

“We want tourism to give the people who live off it – hoteliers, shop and restaurant owners – just as much pleasure as it gives the tourists,” Ms Danchin said.

“If we manage to find this balance, we will make everyone happy and our planet will be happy as well.

“I truly believe it can be done. If the authorities see that you need to invest in the short term to achieve a long-term vision we will progress much faster.

“There are so many problems that all come together in Etretat, so if we can find a solution here, we can find one anywhere.”

Local resident Brigitte Belet, who is part of an organisation called Touche pas à mes Galets (Don’t Touch My Pebbles), has also urged visitors to the beach not to pick up the stones, which break the momentum of storm waves that would otherwise crash into the town.

Around 300kg of pebbles currently disappear from the beach every day in summer, despite a fine of €90 being introduced for those found to be taking one home with them.

Following in the footsteps of Arsène Lupin

Etretat’s popularity as a tourist destination has long been on the increase, but this year it has presented an added appeal to fans of the Netflix series, Lupin.

Lupin was watched by 70 million households in the month following its release, making it the most watched non-English series on Netflix at the time.

This global interest has perhaps served to boost visitor numbers to Etretat even further, as people hope to walk in the footsteps of its protagonist, Assane Diop.

What is more it is unlikely to let up, with a second season planned - and the 80th anniversary of Le Blanc's death coming up on November 6.

22 hours ago
4
What income must Britons show for a six-month visitor visa for France?