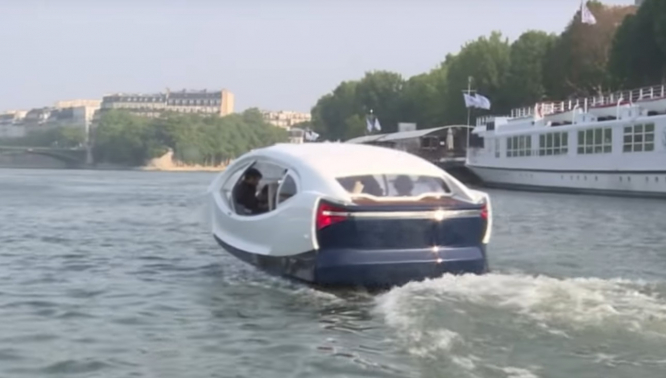 The electric vehicles - dubbed “Sea Bubbles” - had been given official permission to be tested from September 16-20, up to a maximum speed of 30 kph on a set itinerary, between 8-10h and 15-17h.

They “take off” and travel around 30 cm above the water, manoeuvering on three “fins”.

But soon after starting the tests on September 16, the Paris river police immediately stopped the proceedings - with media outlets including Reuters and TF1 watching - after apparently finding that the vessel did not have the correct papers on board (although this was later disputed by Sea Bubbles).

Co-founder and inventor, Alain Thébault - who started the project with co-founder Anders Bringdal - published a tweet showing the incident, with an incredulous tone, asking jokingly: “[Is this what we mean by] #StartUpNation ?”

The taxi was returned to the quay at 9h30 and therefore missed its morning testing time window.

The tests were later able to continue as planned.

A spokesperson from Sea Bubbles said: “We are continuing our tests this week. The river police were not there to check our papers but to ensure our safety during our navigation.”

Should the remaining tests go to plan, it is hoped that the first public, commercial Sea Bubble sea taxis will begin operations in 2020.

In a press release, co-founder Mr Bringdal said: “We are thrilled to be in Paris. All the signals are ready to go green for the start of commercial operations of our Bubble Taxis from the first quarter of 2020.”

While the tester prototypes can carry four people, the full-size Sea Bubbles will have space for 12-32 people, and travel along the river at 12-18 kph.

They are said to be high and stable enough so that travellers who suffer from seasickness will not be affected.

Powered by electric lithium batteries, they make no noise and produce no extra pollution, and can last 2.5 hours after a charge of 40 minutes.

Passengers will be able to download an app to order taxis and monitor the current availability, in the same style as current taxi apps such as Uber.

The price will be “accessible”, the testers said.

After Paris, there are already plans to bring the taxis to other French towns, such as Lyon and Saint-Tropez.

Yet, there has been some controversy between the two founders, with Mr Thébault calling for Mr Bringdal to leave the project, and Mr Thébault saying that he may yet design a hydrogen-powered solution instead.