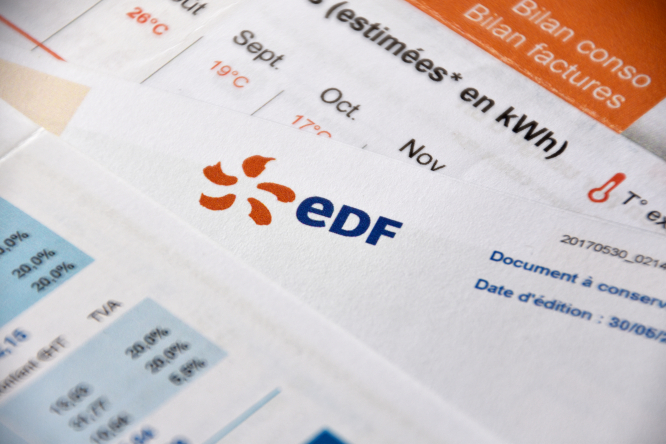 In October, the regulated rate for gas is increasing on average by 12.6%.

This rate is set by the Economy and Energy Ministries and the Commission de régulation de l’énergie (CRE) and applied by Engie, while other providers may use it to inform their tariffs. Certain formulas are used, linked to factors like the cost of supply and prices on the world markets.

Nearly three million Engie customers on regulated tariffs will be affected by the increase.

All households not on regulated tariffs are on 'market' rates, which depend on commercial decisions of firms and the details of a customer's contract. Some, for example, promise a 'fixed' price for one to four years (though not including any variations due to changes in taxes), so will not be affected by this. In other cases 'market' rates may nonetheless be influenced by the rises in the regulated ones, and, inevitably, by the same pressures that inform the regulated rise (such as the current high demand and prices in Asia).

In November, the regulated tariff is set to rise by 15%, increasing for the sixth consecutive month, although measures announced by the prime minister spreading the price hike over the coming months’ bills mean customers should not feel the impact of this increase as acutely.

Electricity and petrol prices are also forecast to increase in coming months, in a situation reminiscent of the conditions that sparked the gilets jaunes protests in 2018.

The protests, which became a national movement in winter 2018/19, began amid rising petrol and diesel prices that protestors found excessive, but quickly came to encompass many issues around social inequality and spending power in France.

As a result, months of rising energy costs this year is causing anxiety among politicians.

President of the MoDem group, Patrick Mignola, told Le Parisien: “We’re talking about subjects of ecology and spending power – we know it’s a cocktail for social explosion [such as the gilets jaunes], and we don’t want to strike the match.”

The prime minister told FranceInfo that the 12.6% gas rise in October would be the last until April 2022, as prices are to remain fixed for the next six months.

“There will be no more increases in the price of gas,” he said. “We are managing a peak [in prices]”.

This is possible as the government plans to even out prices over the coming year, managing seasonal peaks and troughs by keeping overall costs relatively stable.

After peaking in winter, gas prices typically fall in spring and are expected to start decreasing in April 2022. This means customers will pay fixed prices rather than real prices this winter but will then pay higher prices rather than decreased prices in spring to allow gas companies to recuperate their costs.

The next increase in regulated electricity rates, planned for February 2022, will be limited to 4%, the prime minister said.

As a small amount of French electricity is produced from gas, the real increase is likely to be closer to 12%, Ecology Minister Barbara Pompili said earlier in the day.

She told CNews: “We are expecting an increase of around 12%. But in the same way [as for increases in gas prices] we are working to make sure people in France will not be heavily impacted.”

While Ms Pompili said there was “room to manoeuvre” as the government has “extra funds due to the increase in gas prices”, Mr Castex said the government would “reduce a tax on electricity” to keep prices lower.

The prime minister did not make any announcements about rising petrol prices.

He said: “Petrol prices went down during the Covid health crisis and we are returning to pre-crisis prices. We are not seeing an explosion [in prices] as we are globally for gas and electricity.”

However, he said the government was “attentive to the situation”.

Cheque énergie financial aid to be reviewed if needed

In a previous announcement, the government said that an initial amount of €100 in ‘cheques énergies’ to help pay energy bills would be sent to 6 million of France’s lowest-income households in December, to help pay for the rising costs.

“If the measures that we take are not sufficient, we will re-evaluate them,” he said.

How can I save money on energy and other bills in France?

There are a number of ways to lower your energy costs.

It means that an intermediary negotiates with energy companies on behalf of a large number of potential customers with a view to obtaining an advantageous price - read more on this here.

Switching to a competitor aside from EDF and Engie can also reduce bills.

The best way to check if you can obtain a better deal than your current one is to use this comparison website offered by the energy regulator.

Ensuring that your thermostat fluctuates throughout the day can help save costs. You might turn down the temperature during the height of the day, and increase it in the mornings and evenings.

Smart thermostats such as the Google Nest or Hive, which can be controlled on your smartphone, can help make this even easier. They also enable you to monitor your cost savings and other insights on the app too – although they do represent a larger upfront cost.

Read more: Tips to lower your gas or electricity bill in France

How do energy costs in France compare to Europe or UK?

Despite the rising costs, the average spend on energy in France compares well to the rest of Europe.

Read more: How do energy costs in France compare to rest of Europe?

This was 25% cheaper than the EU average (€0.2159 per kWh), and much cheaper compared to Spain or Germany, where prices are respectively 46% and 79% higher than in France.

Energy saving tip: What temperature should my house be?

An average temperature of 19C is said to be optimum for a property in winter.

Yet, as this is only an average, it is possible to increase temperatures in rooms that need a little extra heat, or those you use the most.

In some of the ‘main rooms’ in the house, such as the kitchen or living room, you might increase the temperature to 20-21C.

But if you still feel cold when the thermostat is showing 20C, that could be a sign that your home is not well-insulated.

“A cold wall, which isn’t isolated, might be 14C, and even if you’re heating to 20C, you will feel 17C on your body. The cold wall will give off coldness into the room. So you will feel cold even though the thermometer is saying 20C.”

The same thing can happen if your home is too damp, Ms Clément said.

“When you get out of the water in the summer and your skin is wet, you quickly feel cold,” she said. “It is the same in a damp house, even if you do not see the water droplets, you feel cold.”

It is recommended, however, to keep your bedroom relatively cool, at around 16-19C, to ensure you do not overheat at night. Children’s rooms can be a little warmer.

Seven French contracts to renegotiate and how to do it