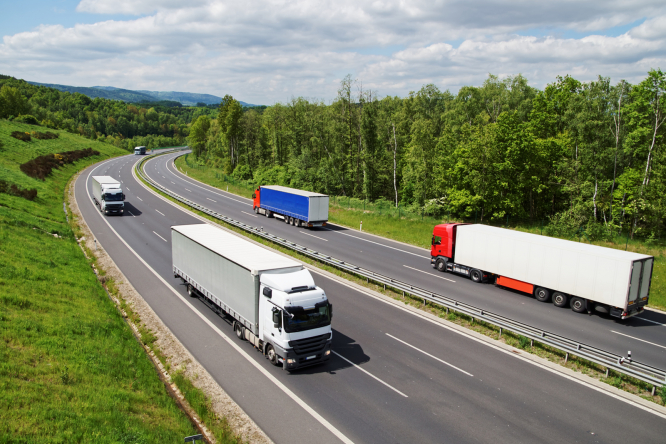 Road transport was responsible for 90% of merchandise transport in France during the first Covid lockdown Pic: Milos Muller / Shutterstock

France is experiencing a shortage of 40,000-50,000 lorry drivers, a leading industry union has said.

However the situation is not as bad as in the UK where around double that number of drivers are lacking, a logistics expert said.

However, representative for FNTR Florence Berthelot, told France Info that the situation in France is “not as bad as it is in the UK”, where there is a shortage of 100,000 drivers, according to the Road Haulage Association.

Reported petrol shortages in the UK due to a lack of petrol haulier drivers has caused a spate of panic buying, with long queues outside petrol stations, and the army reported to be on standby to assist if necessary.

UK Transport Secretary Grant Shapps sought to play down the issue, telling the BBC: "We are starting to see panic buying drop, with more grades of fuel available at more petrol stations."

The BBC reported that 75 military drivers are on standby, and there are calls for priority workers, such as healthcare staff, to receive fuel first.

But despite its own HGV shortages, France does not yet look set to suffer the same fuel shortages as the UK.

Figures from Sagess, which manages petrol stocks, said that it had supplies slightly over the 90-day stocks required by the International Energy Agency.

There are 89 storage sites throughout France , representing 13.9 million tonnes of fuel supply stocks.

France shortage of drivers ‘dates to before pandemic’

In France, road transport was responsible for 90% of merchandise transport during the first lockdown of the Covid health crisis in spring 2020.

But Ms Berthelot said the HGV driver shortage in France dated back to before the health crisis, and was due to existing staff reaching retirement age.

She also said that the five-year training periods for new staff to become fully qualified contributes to delays in recruiting new drivers.

She said low salaries were also an issue – although they are higher in France than in some eastern European countries, she added.

She said: “Candidates are often put off by all of the travel. Often, they just think of making journeys every week, but today there are jobs for all profiles in the industry, [such as for roles] where you don’t have to travel, such as logistics.

“There are jobs where you leave in the morning and get back in the evening, and do all of the urban deliveries. There is a lot of variation.”

Driver shortages have also been seen not only in the UK and France, but also in Germany, Denmark, Poland, Sweden and Norway, according to the British International Freight Association (BIFA).

A report by Transport Intelligence said: “It is safe to assume that similar trends are likely across all western countries, where driver numbers have been on the decline for the past two decades.

“[There are] multiple factors behind driver shortages; the relocation of production to Eastern Europe has further exacerbated the problem, as nationals of these countries prefer to work in factories [at home] over being truck drivers.”

Vacant job roles across a range of sectors have increased to 300,000, according to the Banque de France, with the number of registered job seekers higher now than at the end of 2019.

In response, Mr Castex said “an extra €1.4billion” will be put towards training and qualifications for job seekers and existing workers in sectors experiencing difficulty.

Mr Castex said the funds would come from “emergency credit, budgeted for managing the health crisis”, with €800million dedicated to offering training to 1.4 million job seekers, particularly those who have been unemployed for more than 12 months.

This includes plans to develop a scheme of guaranteed employment following the successful completion of some training courses, and training courses that involve learning on the job alongside studying.

The remaining €600million will be allocated to upskilling 350,000 extra workers in sectors under pressure to transition towards digital or environmentally-friendly working practices, such as the automobile and aeronautical industries.

Unions greeted the announcement with a mixed response. Laurent Berger, head of labour union the CFDT told Le Monde: “It is a very good thing to put funds towards training and ongoing support for job seekers.”

But, he said, the government needed to pay attention to “the logic of these plans in different areas of France – which the prime minister mentioned – and concrete action”.

Many major goods saw a shortage in France (and beyond) due to the pandemic, including furniture, lightbulbs, and certain fresh foods such as strawberries, raspberries, and peas.

There was also a shortage of pasta, and a subsequent worldwide lack of durum wheat, due to 30% of crops in Canada being burned by a heatwave.