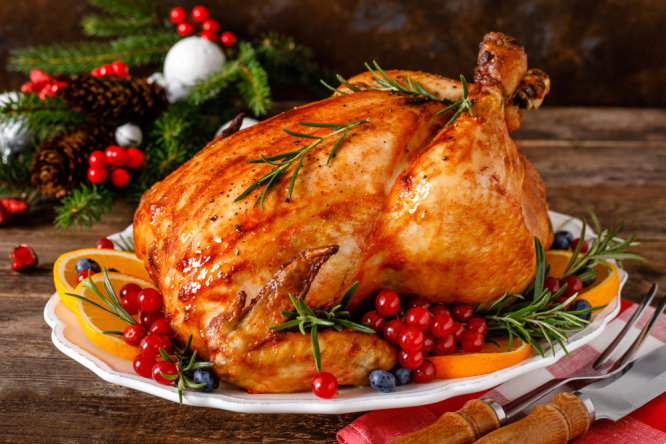 France is set to import turkeys to the UK this year due to a reported 1 million shortfall Pic: Sea Wave / Shutterstock

France could be set to supply up to one million turkeys to the UK for Christmas to make up the predicted shortfall due to labour and raw material shortages across the Channel.

The UK usually produces 5.5 million turkeys per year ahead of the festive season, but this year is expected to raise 20% fewer than normal due to a lack of labour and raw materials, the British Poultry Council has said.

This equates to a shortfall of more than one million birds by Christmas.

Supermarket Aldi has said that people are flocking to stock up ahead of time, with 1,500 frozen turkeys being sold every day; four times more than the usual sales at this time.

As a result, birds are expected to be imported, mainly from France, but also from Poland.

The British will have to "buy a lot of turkeys from the EU", Paul Kelly, managing director of major turkey producer KellyBronze, told the Financial Times.

KellyBronze turkey sales have soared by 230% compared to the same period in 2020, he said.

Mr Kelly said that 30 years ago, about 30% of the UK turkey market was supplied by France, but in the past 15 years, UK supermarkets had always been able to supply “100% of the demand”.

Not so this year.

He added: "The French factories are rubbing their hands together now because they can see all that business they lost coming back to them."

In addition, there is a shortage of butchers in the UK.

On Tuesday, October 5, farmers demonstrated in Manchester at the Conservative Party's annual conference, holding up placards reading "save our bacon".

Pigs are being slaughtered on farms rather than entering supermarkets, because of this labour shortage. Some 10,000 professionals are needed across the Channel to keep the industry going until the holidays, Ouest France said.

There could also be shortages of Christmas pudding in the UK.

Supermarket group Aldi has already seen a 45% increase in pudding sales and has already ordered an extra 250,000 orange chocolate bombs, one of Britain's favourite holiday desserts.

Toy shortage in UK and France?

Toy supply issues could also hit both the UK and France this Christmas, due to labour shortages and possible delivery delays.

Gary Grant, founder of The Entertainer chain, said on October 4 that he was short of hundreds of people in the warehouses, which would lead him to reduce supply and concentrate on the most popular toys.

Barry Hughes, managing director of Golden Bear Toys, spoke to the BBC on September 20 about a "perfect storm" that could see the prices of toys rise considerably.

The same is true in France: although a shortage has been ruled out, prices are expected to soar for some toys.

Philippe Gueydon, general manager of the King Jouet group, told France Bleu on September 28, that prices could rise by more than 3%.

A spokesperson for Joué Club, Franck Mathais, said that while “there will be presents” available, "they may not all be available when customers want to buy them".

The French toy industry is facing logistical problems and additional transport costs, similarly to the UK.

Mr Mathais said that as "57% of French toys come from Asia, in cargo", companies are working to order them ahead of time, to “ensure that these toys arrive” well before December 25.

He advised people to buy early to avoid disappointment.