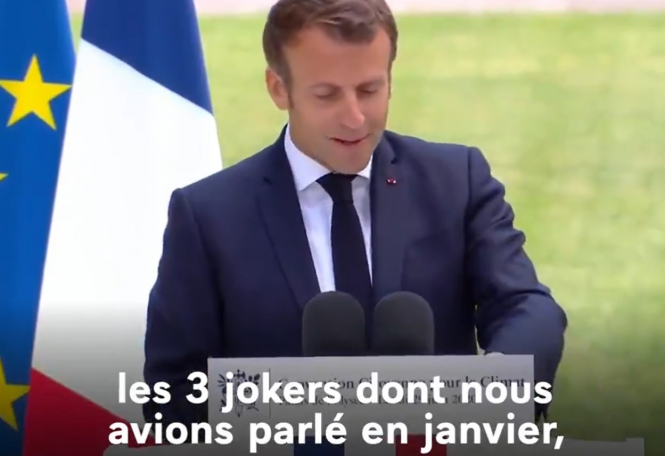 President Macron said he would pass along the majority of the measures...with the exception of three "jokers".
By Connexion journalist

Mr Macron was responding to the 149 measures suggested by the 150 members of the public in the Climate Convention, which concluded the weekend of June 19-21.

In his speech in the Élysée gardens on Monday June 29, the President explained that he would continue to consider and implement the majority of the measures, except three “jokers” that he did not believe would work.

Some of the 146 retained measures are set to be decided by the end of July, while others will be added to the government’s already-announced plan to kickstart the economy following the Covid-19 crisis.

Most of the other measures will be the subject of their own separate “specific law bill” in September, Mr Macron said. He also announced a “€15 billion extra bonus dedicated to ecological measures over the next two years”.

He said: "The climate challenge is requiring us to do a lot more...the time has come to act. That is what your [Climate Convention] work has started...All the proposals accepted will be transmitted, without a filter, either to the government, to Parliament, or directly to the French people...This is the launch of a new process.

"I confirm that I will go to the end of this moral contract that binds us, by sharing all of your proposals, except three 'jokers', out of 149."

These "jokers" are the three measures will not be taken through to the next stage.

Mr Macron said: “The ecological transition should not be undertaken at the detriment of the most remote communes and regions.”

He added that he did not want the good work of the Climate Convention to be “damaged by polemic”, as any suggestion of reducing speed limits on French roads is historically a controversial move.

Mr Macron has therefore postponed any debate on this contentious issue, despite some ministers coming out in favour of the suggestion last week.

Mr Macron also said that he would not be adopting the suggestion to apply 4% to any dividends paid to company investors above a certain level, as he did not want to discourage investors.

He said: “I am not saying that we should not reroute a percentage of investments towards more green investments, but to put all investments under tax would be to reduce our chances of attracting additional investors.”

The President said that he would not adopt the suggestion to alter the beginning of the French Constitution by inserting a clause to make the environment one of the fundamental values of the Republic.

He said: “As it currently stands this change would threaten to place protection for the environment above public liberty, even above our democratic rules.”

While Mr Macron was clear that these three measures would not be going ahead as stated, commentators have suggested that he may not necessarily adopt all of the 146 remaining measures either.

On several topics, Mr Macron did not state his support or lack thereof either way. These included suggestions to stop all domestic flights and to require thermal renovations on existing buildings.

He has come out in support of some key issues, including the idea to create a new crime of “ecocide” for people or corporations that knowingly damage the environment.