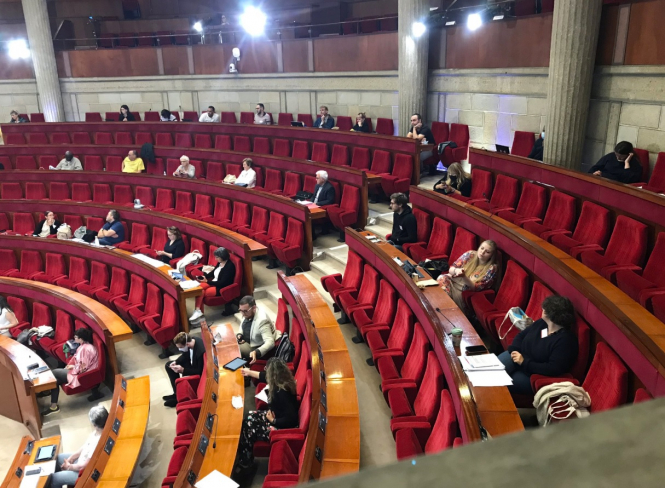 The convention is made up of 150 randomly-selected members of the public. This weekend it is holding its final debate on a series of proposals designed to help combat climate change, before the suggestions are passed to the government and President Emmanuel Macron for final consideration.

The proposals being debated have been divided into categories including the Constitution, housing, food, consumption, transport, production, and work.

These included suggestions to limit the working week to 28 hours, in a bid to reduce fossil fuel use and limit emissions; and the creation of a new crime, dubbed “ecocide” for people and/or companies who deliberately and knowingly damage the environment.

The proposal to “reduce working time without loss of salary within the context of a reduction of greenhouse gases” was rejected by 65% of the 150 convention members.

Many members said that this could have economic consequences, and would also create a negative perception of the convention and its intentions.

One member, Mélanie (members are known only by their first names), said: “This [idea] is totally disconnected from reality, and its indefensible in the current context. This measure would totally discredit the convention, and give people a stick to beat us with.

“If it were to be proposed, it would be rejected [by the government] and would just serve to discredit our work.”

Convention member Lionel added: “This is outside of the scope [of our convention] when it comes to greenhouse gases. We would need a separate convention on work.”

This was the first proposal to be rejected, of a total of around 150 proposals set to be debated over the weekend.

Other proposals have been adopted, and will be passed to the government for possible approval.

The idea of a 4% tax on company dividends of more than 10 million, with the money going towards funding “green” transformation projects, was adopted.

Similarly, 99.3% members of the convention voted to create the new crime of “ecocide”. In addition, they also voted for the creation of a “high authority” on the issue, which would be tasked with making people and companies “respect the planetary limits” that have been judged necessary for the survival of humanity on Earth (such as keeping global warming below 2°C, for example).

Other measures also received support, such as the idea of putting environmental warnings on food (similar to the health warnings found on cigarette packets; this was voted for by 99.3% of the convention members).

The 150 convention members will continue to vote on the measures, which are intended to combat global warming “in a spirit of social justice”.

President Macron is set to receive the convention members and their proposals on June 29, to bring them his “initial responses”, and some of the proposals may be put to a referendum.

The President decided to launch the idea of the citizens’ convention following the gilets jaunes crisis, which was sparked by the announcement of a carbon tax on fuel.

Where you need to have a Crit'Air sticker in France