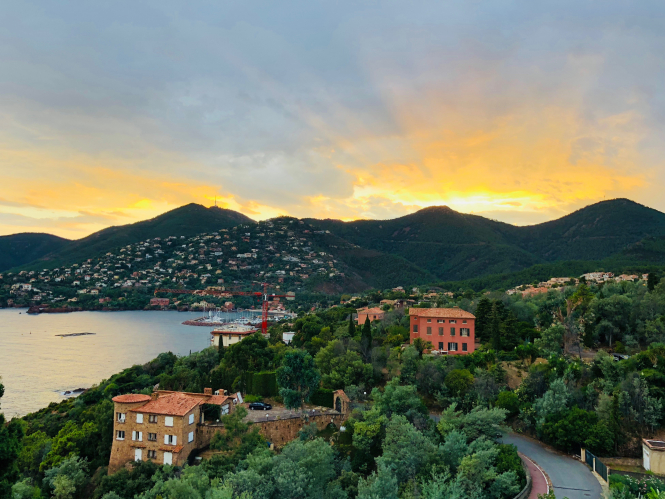 A sunset over the seaside town of Théoule-sur-Mer, where a family of squatters occupied a home for 20 days.
By Jo York

Squatters who took over a holiday home in Théoule-sur-Mer, on the French Riviera, for 20 days in August and September this year are to attend trial today.

The home has been owned by Marie-Thérèse and Henri Kaloustian, a retired couple who live in Lyon, for 36 years.

Mr and Mrs Kaloustian found their home had been left in complete disarray after they managed to evict the squatters, requiring them to replace and deep clean everything from the walls to the sofa, sheets, towels, oven, and washing machine.

Squatters were family with children

The squatters occupying the home were a family with two young children. The parents, known as Mr Abdellah Z and Mrs Jilhan Z, are on trial accused of the crime of violating a home.

Neighbours told news source Le Figaro that the family of squatters “went calmly to the beach every day, with their two children and a big inflatable crocodile under their arm” while they were occupying the home.

They also saw the family socialising with another family on the terrace.

The squatters were eventually removed from the home following a family dispute. Mr Z was arrested for conjugal violence, and Mrs Z who is pregnant, was placed into a shelter with the two children.

They have since reunited, and are currently registered with social care organisation, the Centre communal d’action sociale in Nice.

At the trial the couple will be asked to explain their behaviour and clarify details such as who changed the locks on the home while they were squatting there, and why they changed the name on the electricity bill for the residence.

Mrs Z has claimed that the couple were duped into staying in the home by an intermediary who was charging them €1,000 a month in rent.

The Mairie of Théoule-sur-Mer has said the family were known to housing authorities in Seine-et-Marne, near Paris, as they had been offered social housing in the department in July. They did not accept the offer, with Mrs Z saying: “We had a place to live in Paris but by husband had problems and we had to leave.”

Mr Z told police that he had been shot at where he lived previously.

Mr and Mrs Kaloustian have since reclaimed their home in Théoule-sur-Mer, and have added security features to the house. They say they are “very touched by the generosity” of their neighbours in the town who went out of their way to help them throughout the experience.

Denis Pascale, director general of services at the Mairie, says the incident has made people in the town more vigilant.

He told newspaper Le Figaro: “Neighbours recently called to let us know lights were on in an unoccupied house. Other residents have told us they have installed alarms, or reinforced their doors.”

The case of the squatters in Théoule-sur-Mer has been highly publicised in France, and has had the knock-on-effect of changing the law.

Since the beginning of October homes other than primary residences have been included in the legal definition of a “residence”, increasing homeowners' rights.

When squatters are discovered and the police have been alerted, even in a second home, homeowners can then involve the prefecture, which has 48 hours to respond before giving formal notice that the intruders must leave the residence.

Your rights if squatters move into empty French home