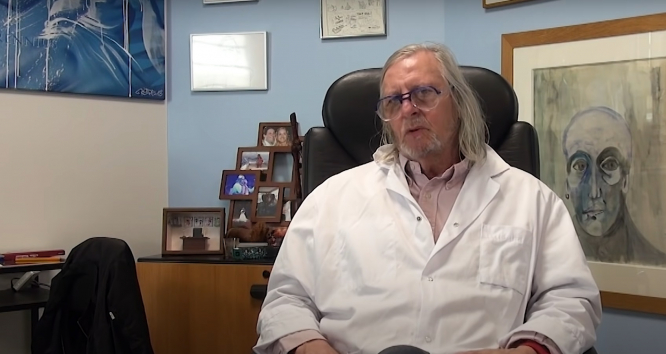 The video was uploaded just over a week ago and has already had more than 1.3million views on YouTube Pic: IHU Méditerranée-Infection / YouTube / Screenshot

People who have just received a Covid vaccination “are at greater risk of being infected with the disease”, controversial Marseille specialist Professor Didier Raoult has claimed in a recent video.

Professor Raoult is an infectious diseases specialist at the l'Institut hospitalo-universitaire de Marseille. He is known for his controversial medical claims, and for publishing online videos on his latest work or theories.

He came to public attention in particular at the start of the Covid-19 pandemic, when his work on the Covid ‘treatment’ hydroxychloroquine hit headlines; and he has described himself as “a renegade”.

The new video, uploaded just over a week ago, has been spreading quickly among anti-vaxx groups, and has been viewed more than 1.3million times.

But scientists speaking to Le Figaro in a ‘fact check’ article have disagreed with most of Professor Raoult’s claims.

Some scientists questioned even said they did not wish to comment on such “unfounded” comments. Professor Jean-Daniel Lelièvre, head of the immunology clinic and of infectious diseases at the CHU Henri Mondor in Créteil, said that Professor’s Raoult’s latest claim was not based on a scientific study.

He said: “I do not comment on non-published data. As far as the real-life data shows, vaccinations reduce symptomatic infections [of Covid-19].”

‘Vaccines are not magic’

It is possible for people to contract Covid in the days following their immunisation, especially after only one injection. But this phenomenon is not “new” or “very strange”, in contrast to Professor Raoult’s claims, Professor Fischer explained.

“Around 12 days for the mRNA vaccines, and three weeks for AstraZeneca. During this interval, you can get infected.”

Data from the Phase 3 clinical trials for the Pfizer vaccine, across 42,000 people, clearly show that until the 14th day after the first injection, infection rates are the same for people who have been injected, and people who have not (the placebo control group).

After 14 days, the vaccinated group then registers no new infections, compared to the control group, who continued to become infected at an exponential rate.

Overall, this means that the vaccines do not have an immediate effect.

Professor Fischer said: “It’s not magic. They do not protect from the second you receive the injection. This reflects the fact that the immune protection is put in place gradually. That is the case for vaccinations against Covid, but also for all other [vaccines]!”

So, while it is possible to become infected in the 10 days following injection, this is not – contrary to the claims made by Professor Raoult – as a result of being vaccinated in the first place.

Professor Fischer said: “Maybe some people who get the vaccination, or who are preparing to get it, maybe relax a little [when it comes to taking precautions], but that’s just a hypothesis. This is just an opportunity to remind people that they must continue to protect themselves in the days after [vaccination].”

People can also become infected after the second dose, although this appears to be much rarer. Professor Fischer explained that in medicine, there is no such thing as “100% effectiveness”.

He said: “Protection offered by vaccines is not total; it is in the order of 90-95% for mRNA and the AstraZeneca [jab], for severe forms of the illness.”

This is not the first time that Professor Raoult’s pronouncements on Covid-19 have come under scrutiny.

In addition to his controversial hydroxychloroquine work, in February 2020 he said that the spread of a pandemic was very unlikely, and in the same month said that Covid-19 was “probably the easiest respiratory infection to treat”.

On May 9, 2020, he told Paris Match: “The likelihood that a vaccine for an emerging illness would become a public health tool is close to zero. Finding a vaccine is a stupid challenge.”

14 hours ago
3
‘Bakeries will die’: Anger in France at Leclerc’s 29-centime baguette

4 days ago
4
France to bring in vaccine passes: What will change and when?

10 hours ago
5
Travel France: Are under 18s covered by parent's Covid vaccine status?