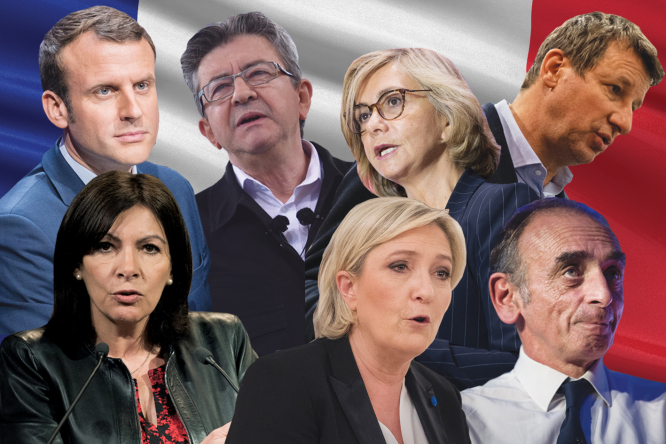 We are just months away from the ballot box, with the first round of the presidential elections on April 10 and the second, if required, on April 24.

The incumbent, Emmanuel Macron, hopes to be the first president since five-year terms were introduced in 2000 to be re-elected, but at least six leading candidates – and another nine who have declared their intention to run – are looking to wrest that prize from him.

Declaring does not mean they will actually run – candidates need the backing of at least 500 elected representatives to get on the official list, with no more than 50 from one department.

For less well-known names, and for extremists, this can be a formidable obstacle.

We outline the current main contenders, including President Macron who has not yet declared himself a candidate but almost certainly will.

The current president will no doubt argue (when he does declare) that he needs another five years to complete his plans to transform France.

Macron, 43, is in the lead in most opinion polls and many French people think he has done a reasonable job so far.

No president has been re-elected since the five-year term was introduced at the end of Jacques Chirac’s presidency, and dégagisme (throw them out) is a strong political force in the country, which prides itself on sometimes being ungovernable.

Although he has not declared his candidacy, some of his main political policies are strengthening the EU, including working towards an EU army, creating a world organisation for the environment, and overhauling the French pension scheme.

Pécresse, 54, was the surprise winner of the primaries for Les Républicains, the official opposition to President Macron’s supporters in parliament.

A former higher education and research minister, under President Sarkozy’s government she pushed through a university reform bill – even though it brought out more than a million people in protest.

Later, she was promoted to budget minister until Sarkozy was voted out of office, and since then has been elected twice as president of Ile-de-France regional council, a job previously held by left-wingers.

After leaving Les Républicains over what she saw as its move to the far right, she rejoined to take part in the primaries.

She, too, favours stricter controls on immigration, but is basing her campaign on her government experience, competence and proven ability to win difficult elections.

She is strongly pro-European and pro-euro.

Le Pen, 53, represented the Front National at the last election, coming second in the first round before being thrashed in a television debate against Emmanuel Macron and losing heavily.

She is basing her campaign on “freedom for the French” and has changed the name of her party to Rassemblement National, moving away from some of its extreme positions and condemning racism.

Her platform is still anti-immigration and anti-Islamist, with a strongly protectionist economic policy, and a foreign policy based on close links with Vladimir Putin’s Russia.

Mélenchon, 70, is the charismatic leader of far-left La France Insoumise, a Trotskyist party which has completely eclipsed the traditionally Stalinist Communist Party in France over the past decade.

He wants to take France out of the euro and out of the European Union, which he sees as being dominated by capitalist interests, and he favours a strongly protectionist economy based on giving power to French workers.

He hopes to increase this by positioning himself as the only alternative to the right and far right.

However, Mélenchon is one candidate who has struggled so far to reach the required number of backers.

Zemmour, 63, is a polemicist who moved from reporting to political commentary on TV.

He came from nowhere to shake the early stages of the race.

He has been riding a swing to the far right by sections of the French media now controlled by billionaire Vincent Bolloré, widely believed to be funding his presidential ambitions.

His policies include strict anti-immigration measures, to stop babies being given non-French names (despite Eric being a Scandinavian name), and to remove the right to any benefits for foreigners who do not contribute to the state.

He is prone to rewriting history, claiming the Vichy government helped save French Jews, and paints a picture of France as being in a state of violent civil war.

His party, Reconquête, was launched to fight what he sees as the ‘replacement’ of French people by foreigners.

Like Mélenchon, Zemmour may struggle to find 500 signatures from elected officials, despite his relative popularity among the French public.

Jadot, 54, is candidate for the green Europe Ecologie Les Verts (EELV) party, having scraped home in the primaries.

A former journalist, he believes being Green necessarily means being left-wing, and favours targeting the state’s resources on policies to fight climate change.

He insists this will be possible while maintaining economic growth – unlike many in his party. EELV traditionally does well in European elections, less so in presidential contests.

Jadot is hoping to reverse this trend.

The mayor of Paris is the Socialists’ candidate after winning the primary, but might yet face a challenge from within the party as her scores in early opinion polls have been low.

Hidalgo, 62, is basing her campaign on traditional socialist values of promoting equality by taxing the rich, and is strongly pro-European.

She is hampered by her performance as mayor. During her tenure, Paris has lost some of its shine, with unresolved problems of rubbish collection and the collapse of the Vélib’ cycle scheme and the shared electric car scheme.

One of her biggest perceived faults is her love of speed limits – she has introduced a 30km/h limit on most Paris streets.

However, she has the backing of what was once a formidable party machinery, and is making attempts to appeal to the country outside Paris.

Some of the other potentially strong contenders are Jean Lassalle, who wants a return to rural values, the factory worker Philippe Poutou who formed a far-left party called Nouveau Parti Anticapitaliste, which won seats in municipal elections, and Arnaud Montebourg, a former finance minister under the Hollande presidency turned champion of Made in France, who runs a honey business.

Also in the running is Christiane Taubira, the former Justice Minister under President François Hollande between 2012 and 2016. She also ran for the presidency back in 2002, the first black woman to seek France’s highest office. She has not yet declared herself a candidate.