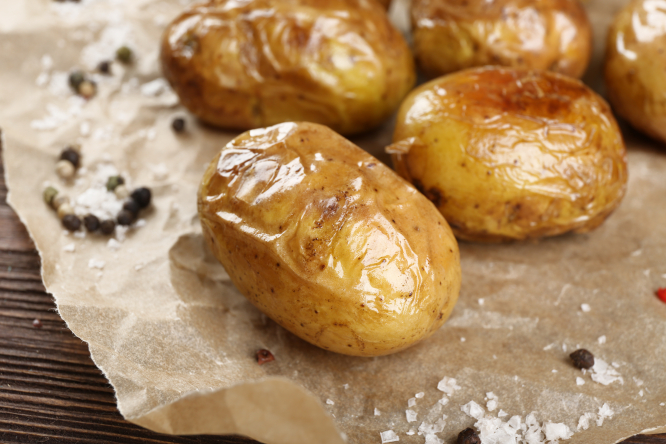 French restaurant chain La Pataterie is trending on Twitter after an American tourist posted on the platform to rave about its “glorious” potatoes Pic: Africa Studio / Shutterstock

French restaurant chain La Pataterie is trending on Twitter after an American couple on a visit to France used the platform to praise its “amazing” baked potato dish.

The staff at La Pataterie, a family restaurant whose menu is built on potatoes, whether baked, fried or moulded into a burger bun, are delighted, says their boss.

Having eaten there while on holiday in Arles (Provence) on Monday (September 6), “aspiring potato influencer” Steve Olson posted an eight-tweet-long thread to rave about the restaurant.

ok, so, we're vacationing in France, and were looking for a place to grab some dinner this evening, and melissa found the most amazing place... @La_Pataterie, a french chain focused on potatoes as a main course. AND IT WAS AMAZING (cc @darth) 1/8 pic.twitter.com/yIZ2WYqdWl

Mr Olson’s tweets have since received 22,500 likes and been retweeted 5,300 times, and steakhouse chain Buffalo Grill has now invited him to try out their menu as well.

“This is wonderful news for us,” La Pataterie’s director Sébastien de Laporte told The Connexion. “The whole team are really happy.

“What is really great is the tone of this gentleman’s tweets. They’re joyful, enthusiastic and we find them really heartwarming.”

“The potato variety that we use is called Samba and we buy them from a cooperative in Hauts-de-France. You won’t be able to get these potatoes in normal shops because they are very big, and so they are unique!

“The recipe that this gentleman tried was the Pom’ Au Four Savoyarde,” a baked potato served with an assortment of hams, raclette cheese, cornichons and salad.

“It was created in 1996 by La Pataterie’s founder, Jean-Christophe Pailleux, and it is still by far one of our bestsellers.

“So we have a lot of experience of making this dish, and the oven that we use is a bit different to the ones you would find at home.

“It is not a unique recipe, it’s not ‘Michelin star’, but all of our ingredients are of a really high quality and we have this potato cooking expertise dating back to 1996.”

“That’s a giant baked potato, but a gloriously baked one,” Mr Olson added. “And I don’t know what type, but guessing something like a giant yukon gold steamed and baked to creamy, tender, but still with structure perfection.

“The angels were singing “Bonnie and Clyde” by Serge Gainsbourg and Bardot. Seriously, this was the greatest potato ever made by human hands, and we got it at what I have to assume is the french equivalent of [American casual restaurant chain] “Chili’s”. Words cannot express my amazement.

“I don’t understand how a chain baked potato could be so much better than every other baked potato I’ve ever had.”

It was our first time, so naturally i had to go for "Classiques Pom's" (sic, i think?!). I got the Pom' Au Four Savoyarde (i am just realizing the apostrophe is for a contraction so maybe that's not a typo). ANYWAY. BEHOLD. 3/8 pic.twitter.com/F4wwXy93kl

Having opened its first restaurant in Brive-la-Gaillarde (Nouvelle-Aquitaine) in 1996, La Pataterie now has 220 branches across France, employing 2,700 people.

On its website, the chain celebrates its “warm,” “pastoral atmosphere,” which it says offers diners a chance to “journey back into the good old days and detach themselves from the world over the course of a meal.”’

What’s Your View?: A fair lunch out in France costs at least €13