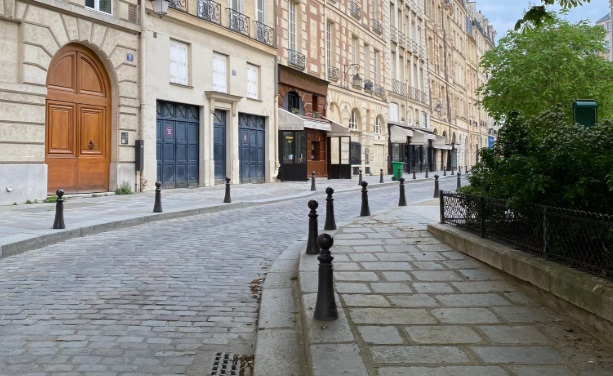 A street in Paris lies empty under confinement, as scientists say France must meet conditions before deconfinement can happen
By Connexion journalist

An extension to confinement is one of the major announcements expected to come out of the address.

It comes as the principality of Monaco, which is bordered by France on all sides, has announced that its confinement measures are to last until at least May 3. Monaco has 90 confirmed cases, with nine people in hospital including four in intensive care. Five patients have recovered.

Its confinement rules are largely the same as France, with breaches punished by fines of up to €200. As its policies are often aligned with France, commentators suggest that this is likely to mean President Macron will announce an extension until the same date (May 3).

President Macron has also made a number of scientific visits in recent days, ahead of his speech, including a trip to see Professor Didier Raoult, the Marseille-based infectious diseases specialist and pioneer of the use of chloroquine against Covid-19.

The visit was reported as part of a wide consultation of experts by the President, ahead of Monday’s address.

Now, national advisory body le Conseil Scientifique has said that there are three conditions in which confinement could eventually be lifted in France.

1. The healthcare system being able to regulate the number of people being admitted to hospital.

This is especially important for intensive care units, with confinement measures having been brought in largely to help ease the pressure on ICUs, explained a statement from le Conseil Scientifique on April 2.

The statement said: "The main objective of containment...was to help relieve intensive care units in the most affected regions such as Grand Est, Hauts-de-France, Corsica, and Ile-de-France. Before envisaging an exit from confinement, the government will have to ensure that the objective of confinement has been achieved.”

Hospitals and ICUs must be in a position to be able to admit new patients without risking overcapacity.

The number of people in intensive care is a key figure for health professionals, as it shows the extent of the pressure on the health system as a whole. Before the epidemic, France had 5,000 intensive care beds.

2. A significant drop in the number of ill people / cases

According to le Conseil Scientifique, the number of positive cases overall of Covid-19 will need to be on the decline before deconfinement can happen, to help avoid a “second wave” of new infections.

It said: "Ideally, this decrease [in cases] should be large enough to make it possible to detect new cases in a systematic way again [as was possible at the start of the virus spread].”

This is not enough to trigger deconfinement yet, but is a step in the right direction, le Conseil Scientifique said.

3. Having a solid strategy in place for gradual deconfinement

France has now appointed Jean Castex, mayor of Prades (Pyrénées-Orientales, Occitanie) as Deconfinement Minister, to take charge of the process.

Deconfinement will likely happen in stages.

But the government is still debating what this third stage will look like in practice.

On Wednesday April 8, the government announced it would roll out a smartphone app called “StopCovid”, which would alert anyone who has come into contact with a confirmed case of Covid-19. This is intended to “strengthen the effectiveness of the monitoring of the epidemic”, the government said.

The government will also likely need to find a way to track and calculate the precise number of new cases, and has even discussed mass blood testing to track how far the virus has spread across the country - even among people who have now recovered, or asymptomatic carriers who may not even have been aware they were infected.