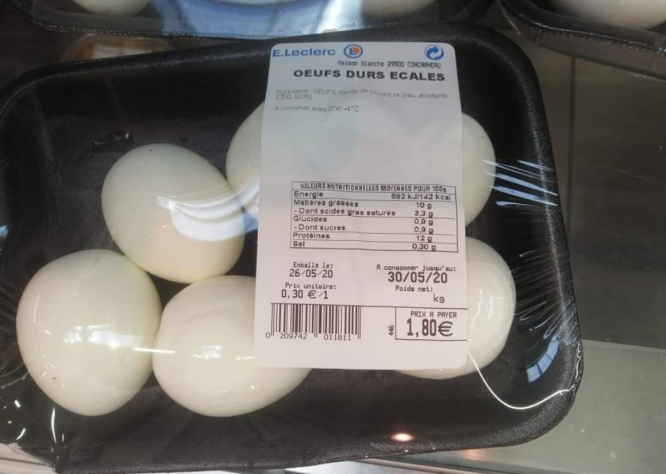 The junior ecology minister tweeted a photo of these eggs in packaging, calling them an "aberration"
By Connexion journalist

Junior ecology minister Brune Poirson tweeted a criticism of the supermarket group, as a comment on a photo of hard-boiled eggs packaged in a polystyrene tray, and covered in a layer of plastic film.

In a sarcastic tone, she said: “Otherwise, to protect an egg, nature has invented an ingenious package, that we call a ‘shell’! Well done Leclerc for this fantastic innovation.

“Happily, the #LoiAntiGaspillage [#AntiWasteLaw] will see the removal of these aberrations.”

This so-called “name and shame” strategy is an intentional way of drawing attention to an issue, Ms Poirson’s team said.

In a statement, they said: “Behind this strategy is the idea that, as well as the law, there is also the question of image and reputation, which is equally important for a business.”

It added: “When you are such a big part of the public’s lives [Leclerc], you cannot have good intentions on the one hand, and on the other, put products onto the market that go against these principles.”

The hard-boiled eggs in this image represent a particular ecological issue.

Firstly, the fact that the eggs must be cooked first beforehand, followed by the double use of non-recyclable material to then package them.

The ecology ministry said: “Technically, the plastic film is recyclable, but we are not sure if it will be recycled properly, or put into the bin, as this [recycling system] is still not developed enough in France.

“And the black tray is probably expanded polystyrene, a product that will be banned from January 1 2021, and which in this case has been dyed with black carbon, which makes the material non-recyclable.”

The anti-waste law - known in French as the Loi Anti-Gaspillage - was voted through in February this year. It will include some bans, including on materials such as expanded polystyrene, but will also introduce a penalty system for some products.

This will mean that they will become too expensive to produce, effectively forcing them off the market and requiring their manufacturers to choose more eco-friendly alternatives.

In defence of Leclerc’s packaging, CEO Michel-Edouard Leclerc tweeted a response, saying that the group had taken significant steps to remove excess packaging in many areas already.

He described the hard-boiled egg packaging as a “blunder”, isolated to the Brittany store it came from.

And he wrote: “If one blunder in a store is worth a Tweet from a minister, how many Tweets [are we due] for the removal of 14 tons of plastic from these Leclerc ice creams?”

This is the second public alert on ecological issues from Ms Poirson in three days.

On Sunday (June 7), she announced that littering in France in a public place - including medical face masks, and cigarette butts - will soon risk a fine of €135, rising to €375 in case of non-payment

She said: “Everyone must understand that all objects thrown on the ground often finish their journey in the ocean.

“If we want clean oceans and seas, it starts with clean pavements.”

French MPs back plan to ban single-use plastic by 2040

French senate allows food shoppers to use own boxes

Face mask littering in France risks fine up to €375