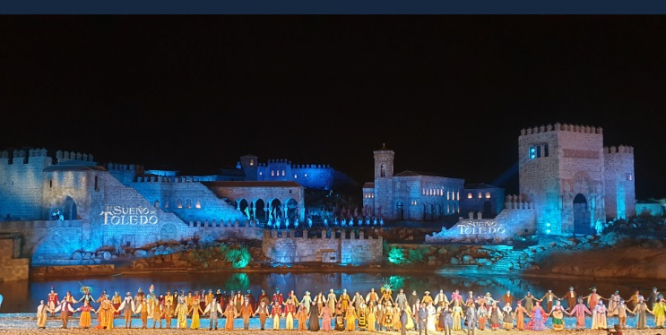 The El Sueño de Toledo show is in the same style as shows at the original French park, but focuses on Toledo history
By Connexion journalist

The new park is located a few kilometres away from Toledo, which was listed as a UNESCO World Heritage site in 1986.

Organisers of Puy-du-Fou Toledo - including Nicolas de Villiers, the son of the original founder, and the park’s current president - are hoping to attract visitors from all over the country due to the site’s convenient location less than one hour’s drive away from the capital city of Madrid.

The new five-hectare theme park is three times’ smaller than its French counterpart, but is still set to create 87 new jobs this year. By 2028, more than 876 direct jobs will have been created, alongside just over 2,400 new jobs created indirectly in the same time.

While the original Puy-du-Fou focuses on Vendée history for its historical re-enactments and famous nighttime light shows, the Toledo site, named Puy-du-Fou España, will pull from its own local history to create a new set of performances in the same spirit.

The El Sueño de Toledo ("The Dream of Toledo") show is already confirmed, with 15 dates scheduled for this year.

The performance lasts one hour 10 minutes, and includes 185 actors and horse riders. Each show will be played to an audience of up to 4,000 visitors.

An added nocturnal theme park will be completed by 2021, and offer nighttime performances and light shows in the same style as those shown in France (known as “Cinéscénie”).

President Mr de Villiers said: “It is a common humanity that we cover in our shows, which creates real emotion whatever your culture [or history]. That is the strength of Puy-du-Fou, and this artistic signature that we have created. We are confident and supported by the Spanish, who are really looking forward to this show.”

Puy-du-Fou is the third-most-visited theme park in France, with more than 1.5 million visitors per year. It also claims to offer the largest sound and light show in the country.

In 2012, it was voted the world’s best theme park by the American Themed Entertainment Association, beating 700 parks and shows in 40 countries to victory.

The original park was also the first in France to win the Thea Classic, the industry equivalent of the Oscars, with judges calling it a “unique” destination.