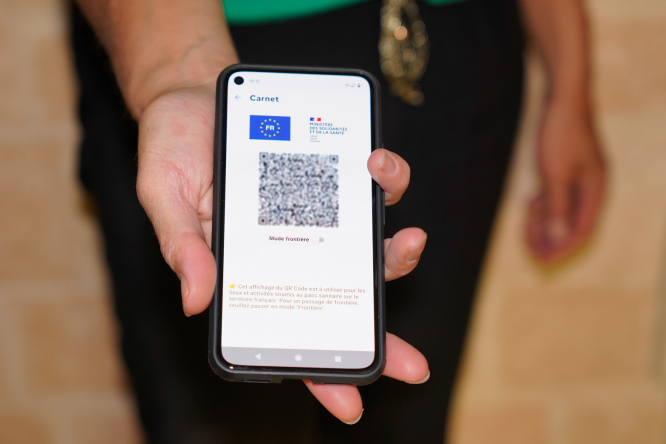 The Ordre, concerned about the suspected high numbers of doctors involved, said it was not talking publicly about the issue for now Pic: sylv1rob1 / Shutterstock

Efforts are being stepped up to fight the problem of fake Covid vaccination certificates in France following the recent death of a woman in hospital who falsely claimed she was vaccinated.

The Connexion spoke to the doctor in whose intensive care unit the woman, in her fifties, died from Covid after being given treatment that would normally be reserved for someone who was vaccinated.

Professor Djillali Annane, head of the unit at the Raymond-Poincaré hospital in Garches, Hauts-de- Seine, said: “Unfortunately, I fear that this will continue.”

He said “it’s impossible to say if she would have survived” had they known she was unvaccinated, but she would certainly have had a much better chance.

The woman’s husband has made a complaint to police and said whoever gave her a fake vaccination certificate was a “murderer”.

There may be other such deaths, as authorities think there could be tens of thousands of fake health passes circulating.

The health pass black market has grown since the summer when the government announced passes would be needed for cafes and restaurants, and for long-distance travel. They reportedly sell for between €100 and €1,000.

The Connexion asked the Ordre des Médecins, the doctors’ professional body, if it had an estimate of how many fakes were in circulation.

The Ordre, concerned about the suspected high numbers of doctors involved, said it was not talking publicly about the issue for now.

The Assurance Maladie state health insurance organisation said that, in collaboration with the police, it is looking into 585 cases that involved 41,046 people, 339 medical workers and 20 vaccination centres.

Interior Minister Gérald Darmanin has said more than 400 inquiries have been opened into fake pass ‘networks’, which he said “often, unfortunately, have links with health professionals”.

He said arrests have been made, and he reminded people that the punishment for issuing a false pass can be up to five years in jail and a fine of €75,000 to €150,000.

There are reports of arrests in areas including Roubaix (Nord), Cantal, Béziers (Hérault) and Paris.

They involve doctors, nurses and firefighters suspected of illegally issuing fake certificates. Individuals who were found with fake passes have also been arrested. A doctor from Nice was accused of supplying the fake pass to the woman who died in the Raymond-Poincaré hospital, but he says his medical identity details were stolen and used to issue the pass.

Professor Annane said the situation in his intensive care unit in Garches is similar to other units across the country.

“One patient first told us he was vaccinated, but later he admitted that he was not,” he said.

The OCLAESP, a police body that fights crimes against public health, said it has identified several ways that fake passes are produced and distributed.

These include buying fake passes on the internet or from individuals or criminal networks, fraudulently using another person’s QR code, health professionals abusing their facilities to issue fake passes, and providing false positive Covid tests that enable the holder to get a pass.

Trying to prevent this fraudulent activity is a huge task for police and health authorities, who are already overstretched by the current surge in Covid infections. Meanwhile, health workers say the unvaccinated, along with those who have fake passes, are seriously hindering the battle to bring the pandemic under control.

“People who are not vaccinated today are the majority of people who are getting the virus and who are helping the spread of the virus, and it is mainly them who end up in hospital,” said Professor Annane.

Some of those who have obtained fake passes might be having second thoughts but could be scared of the consequences if they own up.

Doctors say they are not there to act as police if patients admit the truth to them.

Jérôme Marty, president of the UFMLS doctors’ union, told Ouest- France newspaper: “People who change their minds should be aware doctors will not denounce them.”

However, once a person’s vaccination status – if they have previously been recorded as vaccinated – is changed on the health system’s records, an investigation might be opened into why this happened and where the fake pass came from.