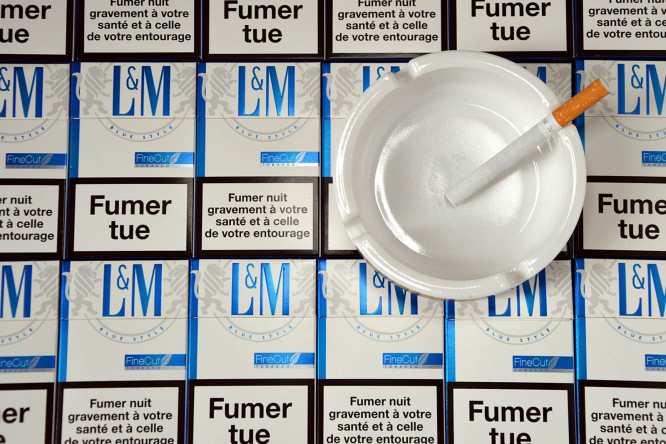 The French government is considering taking countries such as the UK or Australia, which have the world’s highest prices – a pack costs over €20 in Australia – as a model Pic: GERARD BOTTINO / Shutterstock

Tobacco is the main cause, with alcohol second, followed by poor diet and lack of exercise.

President Macron has said he hopes the young who will be 20 in 2030 will be the first generation without tobacco in modern history.

Putting up prices further is one planned solution.

The government is considering taking countries such as the UK or Australia, which have the world’s highest prices – a pack costs over €20 in Australia – as a model.

For alcohol, the plan is to concentrate on those who drink excessively. In France, 10% of adults drink 68% of all alcohol sold.

Better labelling about the risks will be introduced.

Another move is to increase screening by a million to carry out 10million checks a year.

Colorectal cancer has a nine out of 10 survival rate if it is detected early enough, but it has the lowest take-up for screening.

To make it easier, test kits will be available to order online from this October, and later will be on sale in pharmacies.

More money will be targeted at research for the most difficult cancers to treat, including lung, liver, pancreas and oesophagus. There will be more investment in MRI scanning machines to improve detection.

Pat Lockett, president of Cancer Support France (CSF), which helps English-speaking cancer patients and their loved ones, says they welcome the improvements in screening and especially plans to increase access to colorectal screening.

She said: “These, combined with early medical interventions, are leading to long-term cancer survivorship. We do, however, feel all cancer screening methods need wider social media communication, as does obesity and its effects on cancer.”

It is developing links with the HOPE self-help course, developed by Macmillan and Coventry University, which has been successful in the UK. CSF volunteers will need training by Macmillan and hope to get it under way later this year.

The good news is there is an improvement in the ‘five year after diagnosis’ survival rate in nearly all cancers. The Institut National de Cancer and national health agency Santé publique France looked at 73 types of cancer from 1989 to 2018.

Breast cancer improved by nine percentage points, colon by 12 and lung by 11. However, survival rates vary widely – from 96% for thyroid cancer to one type of lung cancer at 7%.

Women have better survival rates than men. It is thought this is because they often go for earlier diagnosis.

The overall improvement in figures is explained by earlier detection, better diagnostic tools and new treatments.