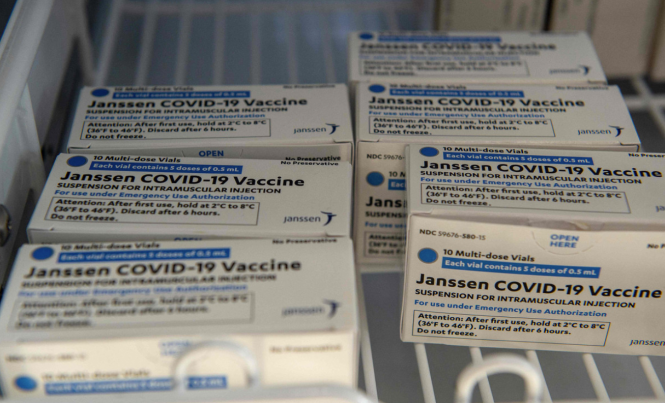 If delays to the Janssen jab continue, they are expected to have a considerable impact on France’s vaccination rollout
By Hannah Thompson

The US suspension of the Johnson & Johnson Covid vaccine, which has paused deliveries to Europe, risks derailing France’s target of vaccinating 30 million people by June 15 if it continues for long.

The Johnson & Johnson “Janssen” vaccine has been suspended in the US by the U.S. Food and Drug Administration pending investigations into reports of rare blood clotting issues.

As a result, the pharmaceutical group has paused delivery of the jab to Europe. Delivery and administration of the vaccine had been set to begin in France next week.

What effect will this have in France?

It is not clear how long the US suspension - and the consequent delivery delays to Europe - will last, but if it continues, it is expected to have a considerable impact on France’s vaccination rollout.

Johnson & Johnson had just announced plans to deliver the vaccine to France, and the jab was expected to form a major part of the rollout in the next few weeks.

This is largely because it has two major advantages over the other vaccines in use: firstly, it can be stored in a normal fridge and does not require the deep freeze of the Pfizer or Moderna jabs. Secondly, it only requires one injection in contrast to the others in use in France, which need two injections for full protection.

France had included the Janssen jab in its forecast to vaccinate 30 million people by June 15, and had planned to start rolling the jab out from April 19.

France currently has 200,000 doses of the Janssen vaccine that have not yet been administered.

Johnson & Johnson - as promised by President Macron - was set to deliver 55 million doses to Europe in the second quarter of the year, and in late March, the Elysée said that the government had “really pushed for them to start delivering in April”.

At the time, Sandra Gallina, director general for health at the European Commission, said that the arrival of the one-dose Janssen vaccine “could really give a push to the vaccination campaign”.

As a result, any delays to its use are likely to have an impact - although this will likely depend on how long the suspension and delivery pause continue.

Dr Marie-Paule Kieny, respected vaccinologist and president of government vaccination advisory group le Comité scientifique sur le vaccin, has said she “hopes” that the US pause of the vaccine will be lifted soon.

She told FranceInfo: “It is very good to pause faced with severe side-effects [but] we hope that we will be able to begin administering these vaccines safely [soon], with an eventual age restriction.

“I hope this pause is temporary and can be lifted safely. We will see if the analyses done by the American regulator will align with these plans. I hope we will be able to restart as soon as possible.”

France had already decided to limit the Janssen vaccine to people aged 50 and over.

Dr Kieny said: “We will have to evaluate the causality of vaccination and of this side-effect.”

Why was the vaccine suspended in the US?

It was suspended due to reports that six people had suffered serious blood clotting issues after receiving the Janssen vaccine. As a result, the FDA recommended that the vaccine be paused pending investigations into possible causality.

But Dr Kieny highlighted that causality is not always clear, especially when it comes to side-effects that appear to be predominantly affecting women, as this may be due to the fact that more women overall have been vaccinated, as they are more likely to work in caring and healthcare professions.

She said: “Initially, it was said that [the side-effects] were seen in women aged under 50.

“But there are problems with sample bias, because women are more likely to have been vaccinated. So we have to look a bit more closely at the US, to see if the predominance of [these severe side-effects] in women stands up.”

Are the blood clotting issues the same as those reported for the AstraZeneca jab?

The AstraZeneca and Janssen vaccines use the same vaccination technology known as “viral vector”, which uses a benign version of the virus that transports fragments of SARS-CoV-2 DNA into the body to build up an immune response.

This is in contrast to the Pfizer and Moderna jabs, which use mRNA technology.

Yet, the Janssen vaccine and the AstraZeneca vaccine do not use the same version of the virus, and no link between the blood clotting issues of the two vaccines has yet been proven.

Dr Kieny said: “We will have to look into the common points between these blood clotting issues and those reported for the AstraZeneca vaccine.”

Covid France: Drive-in vaccinations, variants… Latest update April 13
Covid France: Can I pick vaccine type by choosing where I get it?
Beware of scam Covid-19 appointment calls in France
Covid vaccines open for over-55s in France