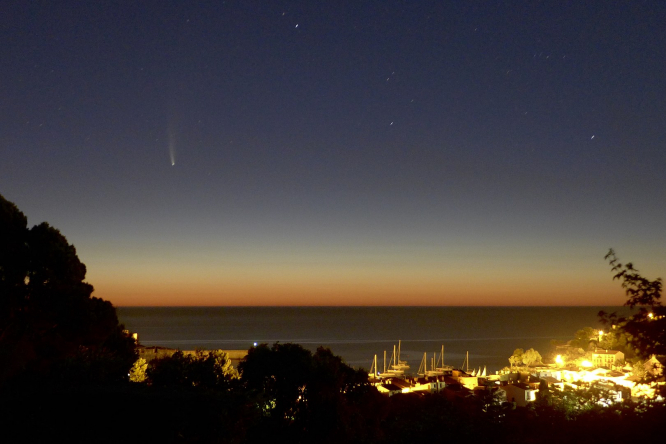 There's a double treat in store for skywatchers in France tonight, with most parts of the country set to enjoy largely clear skies.

The Delta Aquarid meteor shower started around July 12 and is active until late August - but it is set to peak on Tuesday into Wednesday, with between 10 and 20 meteors burning bright in the Earth's atmosphere as it passes through the dust debris left by comets Marsden and Kracht.

The best time to see the shower is around midnight. You may also catch a few shooting stars from the very beginning of the Perseids - which is set to peak around August 11. According to astronomy website EarthSky, broadly speaking, if a meteor comes from the north or northeast, it's probably a Perseid. If it's coming from the south, it's more likely from the Delta Aquarids.

How to see comet NEOWISE in France

Meanwhile, the comet NEOWISE, which was discovered in late March by astronomers during the NEOWISE mission of the Wide-field Infrared Survey Explorer (WISE) telescope, is still visible to the naked eye.

It has already generated some stunning images from France and around the world.

It survived a close encounter with the sun before reaching its closest point to Earth on July 23. It will be most clearly visible about an hour after sunset on Tuesday.

I've seen a lot of #NEOWISE photos, but this is one of my favorites. Taken by Maurice Cabillic from Nantes, France.#Astrophotography #Astronomy #NeowiseComet https://t.co/9L3yb0sd86 pic.twitter.com/H8I1UDc7BA

Absolutely astounding image of Comet Neowise taken by my older brother in France: there's a bolide to the west (exploding meteor) and a satellite to the right... pic.twitter.com/KGI3UFXf2R

Look for the constellation Ursa Major and you should - if skies are clear enough - be able to see the comet to the left. You may need binoculars or a telescope.

If you miss it, you will miss out. The comet is fading as it heads away from the sun and will become invisible to the naked eye in early August. It is expected to fly around again in about 6,700 years.