Mont d’Or cheese on sale in France from tomorrow 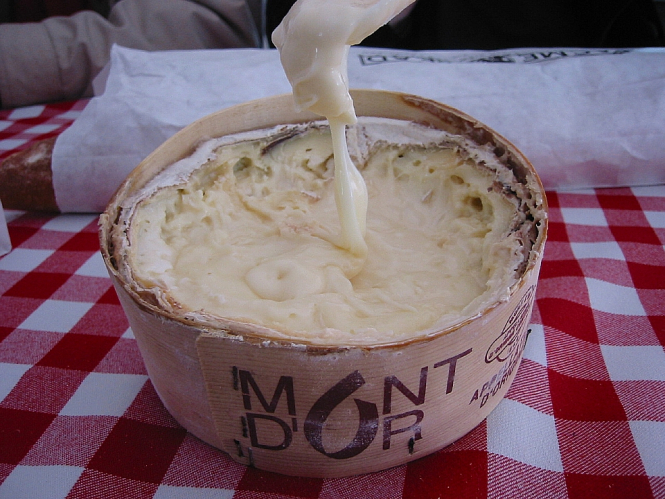 Mont d'Or cheese is synonymous with the changing of the seasons and the start of autumn in France.
By Joanna York

Mont d’Or (also known as Vacherin Mont d’Or or Vacherin Haut-Doubs) is a cow’s milk cheese with a long history.

The French Encyclopaedia of Cheese says written references to the Mont d’Or have been found dating from as early as 1280.

Named after the highest peak in the department of Doubs in Bourgogne-Franche-Comté region, the summit of Mont d’Or reaches 1,461 metres. Production of the cheese started when monks living in the mountain cleared space to allow for fruit trees to be planted and cows to graze.

In summertime, milk from the cows grazing in the mountains was used to make large wheels of Comté and Gruyère cheese. When the first snows started to fall in August, the cows would be brought down to graze in lower fields. As milk production reduced over the cooler months, cheesemakers would make smaller cheeses, such as Mont d’Or.

Mont d’Or production now runs from August 15 to March 15. The first cheeses are available for sale on September 10, making Mont d’Or synonymous with the turning of the seasons and the beginning of autumn in France.

Mountain peaks in the department of Doubs, where cows graze in summer (Photo: Vasile Cotovanu/Flickr)

In the 18th century, Mont d’Or was a favourite cheese of Louis XV. At this time it was also officially classed in a departmental inventory of cheesemakers, where it was described as “like a cheese otherwise known as cream, because of its flavour and its soft consistency”.

By 1980 the cheese had been given Appellation d‘Origine Contrôlée status, meaning strict guidelines are in place defining how it is made. This ensures that Mont d’Or cheeses are authentic and of consistent quality typical to the region in which they are produced.

In 1996, Appelation d’Origine Protégée status was added, meaning that at a European level, Mont d’Or cheese can only refer to the specific product, made under unique conditions in France.

Mont d’Or producers in France are confined to a specific area, and can only use raw milk from grass-fed Montbeliarde or French Simmental herds. The cheese must be produced at an altitude of 700m.

Once in their round, wooden boxes, and wrapped in spruce leaves, the cheeses take 21 days to mature. During this time, they are turned and rubbed with salt water every day. The spruce boxes the cheeses are kept in are slightly smaller than the cheese itself. This produces a craggy-looking crust on top of the cheese, reminiscent of the mountainous terrain where it is produced.

How to eat Mont d’Or cheese

Perfectly ripe Mont d’Or has a soft, creamy texture that can be eaten straight from the box.

Alternatively, wrap the cheese in foil, place it back in its wooden crate and bake in the oven for a gooey-dipping cheese. For extra flavour, add garlic, a splash of wine or black pepper before baking. Bon appétit!