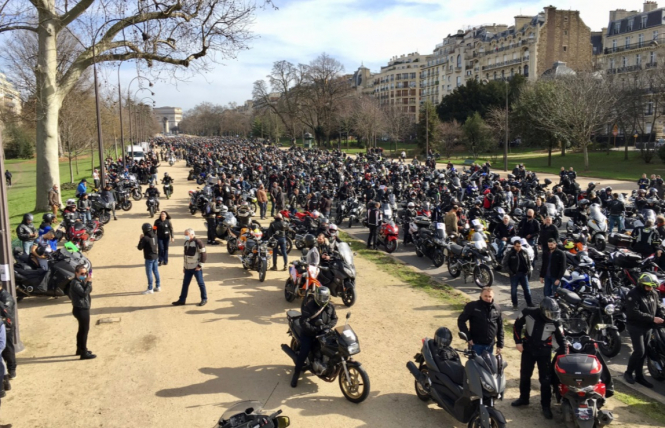 Thousands of motorbike riders in France have protested this weekend against a ruling that bans them from being allowed to weave in and out of other queuing or slow-moving traffic on the roads.

The practice is banned everywhere since February 1, under pain of a €135 fine and three points from the driving licence.

In fact the 'ban' is not new as such, as it had only officially been permitted on certain roads in three departments since 2016 as part of a trial.

The trial has now ended and the permission will not, as bikers had hoped, be written into the French highway code.

Thousands of motorbike riders protested in several towns in France against the ban this weekend including Paris, Lille, Toulouse, and Lyon.

The ban means in theory that motorbikes must use the roads like a car or any other vehicle, and stay in line.

In reality most two-wheeler riders do ride up between traffic and up until now has usually been tolerated, however riders fear the law could be more strictly enforced.

The decision not to authorise the practice came after road safety officials condemned the results of the trial as “disappointing”, after a report showed that the number of motorbike accidents on the trial roads, which were all motorways or dual carriageways, had risen by 12%.

Bikers barred from riding between lanes as French trial ends

Vroom for more as bikers group roars towards expansion