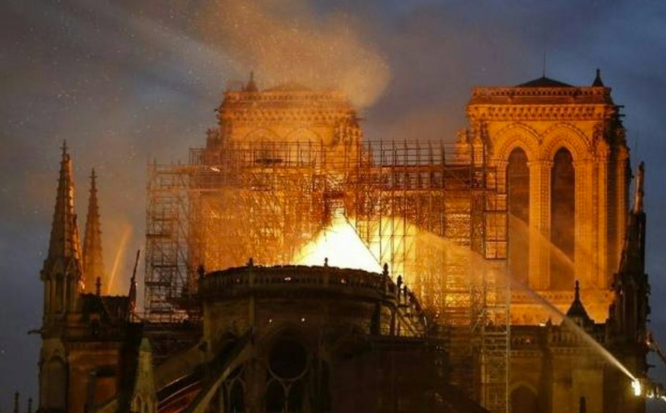 Two years on from the Notre Dame blaze, President Emmanuel Macron and building authorities have reiterated their pledge to finish works and hold a service in 2024 Pic: Mediavenir / @Mediavenir / Twitter

Two years on from the Notre Dame blaze, President Emmanuel Macron and building authorities have reiterated their pledge to finish works and hold a service in 2024, as a new possible cause of the incident is suggested.

Fire engulfed the Notre Dame cathedral on April 15, 2019, causing the collapse of the prized spire and severe damage inside and out.

A definitive cause of the blaze has not yet been established, although it has been ruled as accidental, and possibly linked to restoration work taking place in the spire at the time.

Now, an inquiry into the blaze has found that six electronic bells - which were apparently intended to be temporary - had been installed in the spire, with cables running from them in the roof space.

These may have short-circuited and started the blaze, it has been suggested.

Julien Le Bras, head of the company Le Bras frère and its scaffolding subsidiary, Europe Echafaudage, which was working on the spire at the time of the fire, told Marianne that the revelation had been one of the major surprises of the judicial inquiry into the incident.

He added that his staff had been surprised to hear the bells during their work there before the fire.

He said: “We weren’t expecting that. But knowing why these bells were there, and if they were regularly maintained or authorised; that’s not my problem.

Le Canard Enchaîné reported: “Electric wires were running in the roof, placed there at the express demand of the clergy. Despite the risk of short-circuiting, and in breach of all the safety regulations laid out by the chief architects of historic monuments.”

Until now, the inquiry had focused on the hypothesis of a “hot point”, or a source of heat in the spire that could have caused the fire.

Yet, according to Mr Le Bras, the 12 workers in the spire - who have themselves been giving evidence to the inquiry - confirmed that there was no heat source in the spire or the roof.

He said: “Nothing, no welding, no cutting, no grinding; I am positive.”

Mr Le Bras has also disputed another hypothesis, which is that the fire may have been caused by electric cables and machinery connected to the two roof lifts that the workers had installed as part of their construction site.

These cables and the machinery were positioned a good 15 metres below the spire and the alleged start of the blaze.

He said: “I can confirm that the lift hypothesis is, in my opinion, far-fetched. The motor and all the electric parts were far below the place where the fire started.”

Rebuilding and services by 2024

The inquiry continues as President Macron this week reiterated his pledge that the cathedral would be rebuilt by the deadline of 2024, and said that officials aim to hold the first service in 2024.

In newspaper Le Parisien, the president said: “The cathedral of the people of Paris, which is a little bit the cathedral of every Frenchman and Frenchwoman, seemed untouchable. That it could disappear was unthinkable. This moment [the fire] moved all of us.

“We are holding firm and we will rebuild. The commitment to [rebuild] by 2024 will be maintained.”

General Jean-Louis Georgelin, president of the cathedral’s public rebuilding association, said: “The mission is difficult. We must concentrate on the objective of making the cathedral ready for visits and services by 2024.

“That is the president’s wish and we will keep to that timescale.”

The general was speaking on the second anniversary of the Notre Dame fire, ahead of a visit on-site with President Macron and Culture Minister Roselyne Bachelot.

General Georgelin said: “The objective is to hold a service in 2024, but that doesn’t mean everything will be finished. Inside, we hope that everything will be practically finished, that the roof will have been repaired, that the organ will have been remounted and tuned, and the interior design will be done; and we will be able to revisit the cathedral and hold services.

“Maybe some of the chapels will not be finished [by then], and maybe there will still be work done on the outside. But since the first stone was laid in 1163, the cathedral has been under construction.”

More than €833 million has been pledged by entrepreneurs and members of the public to help restore the building.

General Georgelin denied that the amount was excessive, saying: “We will need all of these donations for all the necessary work, to get this cathedral back on its feet.”

8 hours ago
3
Visitor visa for France: How do we prove we own our second home?